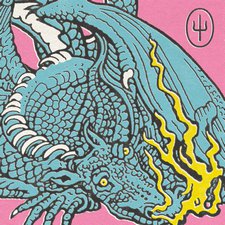 Twenty One Pilots
Scaled and Icy


The weight of following up widely successful and critically acclaimed albums like Blurryface and Trench could have paralyzed a lesser band, but eclectic-pop duo Twenty One Pilots is up to the task. Further leaning into their defiance of convention, they completely sidestep the expectations with their newest full-length album, the curiously titled Scaled and Icy. Instead of a deeper dive into the dense and thematically heavy storyline of Dema, Clancy, and the Bishops, Tyler and Josh choose to create an album geared toward the upbeat pop sheen of many of their contemporaries. In some ways, this is natural with Josh getting married and Tyler and his wife Jenna having a baby since the release of Trench. They both seem to be in a much happier place despite a worldwide pandemic. But are these songs a little too perfect, and should we trust them? This reviewer is getting some weird WandaVision vibes and a sinking feeling that not all is quite as it seems.

First, lets start with the album title and artwork featuring a much more colorful palate and a dragon. In interviews, Joseph has revealed that Scaled and Icy is just a shortening of the state of his life during the pandemic of scaled back and isolated. Also, it is worth noting that Scaled and Icy is an anagram that, when scrambled, spell "Clancy is Dead," loosely tying this seemingly random title to the deeper narrative. The little dragon figurine on the cover is named Trash and was kept atop Tyler's workspace when making the album representing, "equal parts inspiration, fear, and magic." Fans with a sharp eye will also notice the top right-hand corner of the album cover doesn't depict the traditional TOP logo or one of its variants, but instead one that looks like the oriental weapon, the Sai. Additionally, Sai is a shortening of Scaled and Icy and featured in the music video for single "Christmas Saves the Year," released in 2020. Zooming in shows the phrase, "Sai is propaganda." The duo is dropping hints and clues that are something outside of the normal---But what?

After viewing the tightly produced Livestream event they performed in the evening of the albums release date, it would seem to confirm early theories that they are under DEMA control and fighting against their usage as propagandists under their direction. Whether this is strictly a brilliant marketing ploy or a good case of "reading the room," its a clever way to hit pause at the very least. The Livestream was one of the best entertainment experiences of recent memory and I truly hope for its release for a wider audience.

Musically, there is a glossy sheen typically absent from their greater catalog, with sunnier piano-pop opener "Good Day," and later track "Mulberry Street" being the biggest examples. Taking a look at the lyrics of "Good Day" reveals a juxtaposition of Billy Joel-like musicality and dark thoughts from Tyler imagining what it would be like to lose his wife and daughter, almost as if he is in the denial stage of grief. Or, maybe hes being forced to say something he doesn't believe by DEMA. "Choker" sounds like Tyler is resigned to choking on fears or seizing up under pressure. Again, this would lend toward the theory of Tyler believing a lie or his being forced to sing under duress. The chorus gives even greater credence to this thought when he intones despondently, I know its over/I was born a choker/Nobodys coming for me. "Saturday" has a more positive disco-dance vibe, a la last year's single Level of Concern, and plays as a going out-on-the-town jam. Other highlights for me were the guitar-based The Outside that also features handclaps and a rap bridge reminiscent of TobyMac. Also standing out is the ominous return of Blurryface era voicing and gang vocals on No Chances, and one of the best songs the band has released yet in closer, Redecorate. Examining the lyrics and background of the latter it's important to note that the song isn't strictly from Typer's perspective, but inspired by friends who lost their son. It is a heartbreaking, though ultimately hopeful, look into loss and acts as a perfect bookend to his imaginary scenario of opener Good Day.

Aside from the obvious musical departure, the other things of note that didnt hit the target for me would be the two songs Bounce Man and Formidable," which scream filler, a trap the band hasn't fallen victim to often. Secondly, the album is lacking in much spiritual content, be it overt or implicit, which to be honest could be purposefully the point of the entire album and not a fair criticism. Regardless, something is certainly missing from the normal homerun album stretch of Vessels through Trench, keeping it from upper-tier status. Lyrically, this album has less meat, opting for some cotton candy dessert instead. Thats not to say it's devoid of anything of value to say, as it once again touches on mental health, walking in confidence, the disruption of schedule during COVID-19, the attempt by media to weaponize watchers, and other vapid vices.

Ultimately, theres something here for those just here for some catchy tunes, or those wanting to dig a little further into the expanding narrative. Either way, neither type of fan should feel bad for enjoying Scaled and Icy, nor should others who dont care for it at all feel bad for skipping it as they wait for a more direct follow-up to Trench. This album isn't for everybody, and that's okay. Overall, SAI doesnt quite measure up to the three albums preceding it, but neither was it trying to. It does, however, leave me with high expectancy for what happens next, and it wouldn't surprise me at all if that album was also released in 2021. In the end, Scaled and Icy is a classic example of "to be continued"---and I am eager to hear more.