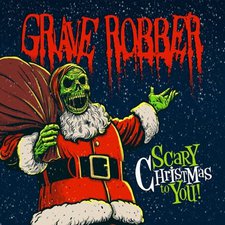 
Your friendly neighborhood Christian horror punk band, Grave Robber is at it again with their second release of 2019. Just recently they released a compilation album that featured the band and some friends playing acoustic renditions of Grave Robber songs. It was an interesting concept that went over well with fans. This time, they're offering their take on some well-known Christmas classics as they wish a Scary Christmas To You.

If you're familiar with the sounds of Grave Robber, you should know that this EP is doesn't really stray from the path. While songs like "Angels We Have Heard On High" and "Joy to the World" are a lot more straightforward than their usual material, the band does put their own spin on a couple of other classics. "Have Yourself A Merry Little Christmas" becomes "Have Yourself A Scary Little Christmas," with a warning about Krampus, but reassurance that we as Christians don't need to fear him. Meanwhile, instead of getting run over by a reindeer, we find that "Grandma Got Half Eaten By A Zombie." Sure, it's a little grotesque, but no more ridiculous than the original version (although it does rock a little harder).

I was surprised to hear a cover of "We're A Couple of Misfits" from the 1964 classic Rudolph the Red-Nosed Reindeer. I don't know that I've ever heard another rendition of that song, but they managed to make it a bit more bearable. Grave Robber's take on "You're A Mean One, Mr. Grinch" is second only to the original and is a lot of fun. I'll never not love hearing Shawn Browning sing lyrics like "nasty wasty" and "stink, stank, stunk." "Father Christmas" is an interesting song that I had completely forgotten about until this EP came out. The punk rock sound works great for this song, which is about a gang of poor children threatening to beat up a mall Santa if he doesn't bring them money instead of toys this year. You just have to hear it. Finally, the album closes with - for lack of a better term - a parody of the Misfits song, "Where Eagles Dare." The original isn't Christmas-adjacent at all (and the Misfits' version contains some repeated profanity, so keep that in mind if you're interested in comparing the two like I was; this version does not contain the profanity), so it's a bizarre choice, but an enjoyable one nonetheless.

Over the past few years, it's become increasingly easy for me to fall into a Christmas music fatigue. With Christmas releases coming out as early as September these days, and most of them being technically good but just different artists singing the same songs in the same way over and over again, it's easy to not care. So when Grave Robber announced this EP, I was glad to have some new Christmas music to be excited about. Scary Christmas To You is easily my favorite Christmas release this year, and I highly recommend it to anyone as bored as I have been with the holiday offerings.