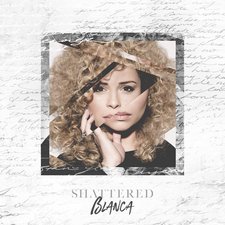 
Blanca Callahan may be one of the best kept secrets in all of popular music. A little bit Beyoncé, a dash of Adele and a whole lot of soul, Blanca has shown herself to be both a fantastic songwriter and killer performer in equal measure. With a forceful, dramatic voice and a versatile musical backdrop, this former Group1Crew member has forged a noteworthy solo career with just two solo albums. 2015's self-titled debut was chock-full of barn-burning, creative pop / R&B songs like the naturally rhythmic "Different Drum," and the hypnotic and catchy "Echo."

Her follow-up, Shattered, could be a greatest hits album by a lesser talent. At a generous fourteen songs and 48 minutes, the album bounces around between creative and radio-ready (which is by no means a criticism) pop numbers and slower, soulful tunes that feature Blanca's powerhouse voice. Rhythmic openers "Remind Me" and "What If" set the tone for an energetic ride, with modern elements like spirally keyboard lines and trance-like electronic beats. Blanca's huge vocals carry through the wall of sounds and immediately hook the listener. These two songs would not be out of place on Top 40 radio playlists, and indeed, would be a blast of positivity and light to that format.

But as great as she is on the more dancy numbers, Blanca's voice shines even brighter on the slower, torch songs, like "Real Love," "Heaven" and "Run To The River." On the first of these, Blanca knocks the swinging Gospel song out of the park, and gives the aforementioned Beyoncé a run for her diva money. But it's about so much more than vocal prowess here. Blanca takes on plastic religion and testifies soulfully that "Oh, but we got real pain and real fears / thirsting for the drying of our real tears / It's not satisfying anymore / Ain't it true that the veil was torn / I don't need no stained glass / To be washed in His blood / I don't need no perfect, put together pretty words / To be enough, no / I want Jesus and His real love / Something that I crave deep inside of my bones / So you can leave your religion at home." It's a powerhouse turn of soul and substance that bears repeat listens. The Broadway-esq "Heaven," which sounds like a callback to 60's era Civil Rights anthems like "People Get Ready," yet reaches higher than any of the secular answers that get so easily offered, "These days I been getting ready / I been thinking bout a city of gold / See my brother got one foot in the gutter / But I'm headed for that city of gold / Oh my sister if you're feeling heavy / Come and hand over your load / We all gonna make it together / Gonna see that city of gold / I been thinking bout heaven / Thinking bout heaven." "Run To The River," which features Gospel Music luminary Tye Tribbett, follows, and is a haunting counterpoint to the hopefulness of "Heaven," with Tribbett using vocal distortion to great, chilling effect. The following "How Much More" answers the questions that the two previous songs ask, and these three songs might be the best middle section of an album this year.

Great art knows no genre, and it might be tempting for fans of certain other forms of music to dismiss the modern R&B of Shattered as lighter fare. But with honest, objective listening, you might just realize that Blanca has fused real heart and soul to this Soul music. Shattered sounds like the kind of modern music that the modern world needs to hear.

Former Group 1 Crew member Blanca is back with her second solo offering, Shattered, a solid pop album with a great balance of upbeat tracks ("Remind Me," "Give It All," "Undeniable"), mid-tempo numbers ("Steady," "All In"), and serious slower songs ("Shattered," "Heaven"). Throughout the album, Blanca shares about her anxieties, struggles, and doubts, but then counters it with Christ's sufficiency in all areas of her life. Shattered is squarely focused on Jesus with a level of authenticity that is refreshing to hear; there is a slew of questions and thoughts throughout that can only come from someone who has truly wrestled with the faith (just listen to the first verse on "Undeniable"). Musically, the album uses fairly standard pop beats, though, from track to track (and during the songs), there are some dynamics in play that make it worth the repeated listens. Vocally, Blanca is at the top of her game--she has a fantastic range hitting high notes with seemingly little effort and even going pretty low at times ("Feel It"). Overall, Shattered is a step up from Blanca's eponymous solo debut in that there are more individual standout tracks, and it's more sonically cohesive. Highlights include "Remind Me," "What If," "Real Love," and "Undeniable." - Review date: 9/13/18, Christopher Smith of Jesusfreakhideout.com