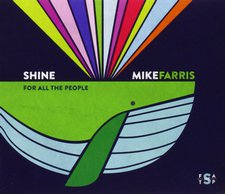 Mike Farris
Shine For All the People


Mike Farris is a Grammy Award winning artist who has overcome a lifestyle of addiction. Whether it was the addiction he struggled with at a young age, or the addiction to pain medication he fought after finding success with his album Salvation in Lights, Mike's road to the Grammy for "Best Roots Gospel Album" wasn't an easy one. All of these struggles and hardships lead up to his 2014 album Shine For All the People; an album worthy of the award it now holds. Mike was also the first person to receive the award that recognizes quality gospel performances in the American roots subgenres (folk, bluegrass, southern gospel, regional roots music, and more). On the album, Farris shows a ton of diversity as he blends his extremely soulful voice with sounds ranging from traditional gospel, to Motown, to blues, even a little funk and more -- often with an interesting twist that you'd expect to hear from "The King" himself.

"River Jordan" opens the album up with a nice touch. It's not necessarily the best song present, but it certainly showcases Farris' outstanding vocals and gives you a taste of what's to come. "Jonah and the Whale" is up next and the organ/choir combination just screams gospel. Mike tells the story of Jonah early and then relates it to his own life later in the song. If the organ isn't enough to hook you, the horn section might do the trick. "Sparrow" starts as a slower piano driven song that highlights Farris' unique vocals. The Elvis influence is pretty evident in this one early on. Again, the horn section is used to near perfection in this number, giving it a great sound. "Mercy Now" is the first song to maintain a slow pace throughout and could be considered one of the best tracks on the record. The song is sung as a prayer asking God to show mercy to himself and others. Farris sings, "I know we don't deserve it, but we need it anyhow; yes we do. Oh, we hang in the balance in-between hell and higher ground. Oh, every single one of us could use a little mercy now." The first big Motown influence is felt on "Real Fine Day." The track sounds amazing and would fit right in with the songs from that time period. It is also very likely this reviewer's favorite.

"The Lord Will Make a Way Somehow" continues the old school gospel feel of the album as another impressive tune. "Power of Love" has more of a soul and funk vibe than some of the previous songs, but still plays nicely in the mix. The Motown flavor returns in "Something Keeps Telling Me." Farris seems to be at his best when pursuing this sound and his voice fits right in with the legends of Motown; the music is spot on as well. "How It Feels to Be Free" begins winding down the album with a more straightforward gospel sound. The album closer is Mike's take on the 1920's children gospel song, "This Little Light of Mine." Farris changes out the traditional choir that backed him the entire album for a more fitting children's choir. Piano and organ dominate the track, but the guitar solo really sets it off well. The track is easily the most adventurous musically and in turn is one of the best sounding songs present.

There is no doubt that this multi-faceted gospel album will not be for everyone. Regardless of that fact, Mike Farris offers up something you really don't hear these days. The album has a vintage feel from the music to the recordings themselves. God has brought Mike through his struggles to a place where he can use his talents to make some great art. If you like some old school gospel, Motown, or just really soulful vocals, look no further than Shine For All the People. While the Grammy's are generally a popularity contest, the voters got the inaugural "Best Roots Gospel Album" right. Farris and this album are truly deserving of such accolades. Not only is it great music, but, more than anything, it shows that God can work through anything. No struggle or addiction is too much for our Creator. Grab Shine For All the People today and hear something new and different in today's heavily saturated worship scene.