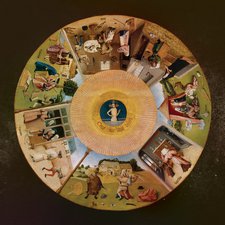 
A brief history lesson: there once was a Southern Californian indie/pop rock band called Sherwood. After gaining a small, but loyal, fanbase, and playing together and releasing albums for a decade, the band made the decision to part ways. Their final bow was their critically-acclaimed album Qu. However, with this parting came the formation of a new band with a specific purpose; this band was called Wayfarer, and their purpose was to take hymns as old as time (some older and more obscure) and make them modern. Along came a name change in 2013 and a record contract deal with BadChristian Music, and Pacific Gold is poised to take their music to a larger audience with their fantastic label debut, Sing My Welcome Home.

Pacific Gold's music brings with it a reflection on how music was done in days gone by. Not a band to shy away from using the term "psychedelic rock" to describe their sound, a very appropriate term for a lot of Sing My Welcome Home, the album is reminiscent of the Jesus music era, as well as classic rock bands like Chicago and The Beatles. Also - and this is very strange - the opening song, "A Day Is Coming," sounds like "Then The Morning Comes" by Smash Mouth mixed with Audio Adrenaline's "Mighty Good Leader." In the grand scheme of the album, this is an anomaly, but interesting nonetheless.

As I mentioned, and as you may have already known, Pacific Gold is a hymns band (save for a couple of cover songs they did on previous releases). What's interesting to note here, though, is that they have a tendency to change some of the lyrics in their versions. In some cases, it may be no more than using modern English, such as in "Gone to the Grave," where the original lyrics "Thou art gone to the grave, but we will not deplore thee, though sorrows and darkness encompass the tomb" is changed to "You are gone to the grave, but we will not mourn you, although sorrow and darkness gather 'round your tomb." In other cases, they only used two or three verses of the hymn, or in the case of "A Day Is Coming," they did both of those things, in addition to completely rearranging the song. The meaning is entirely the same, of course, but they switched lines around to make it flow a little better.

Though there is a lot to like about Sing My Welcome Home, there are a few songs in particular that really stick out. "I Will Know Him" is the first, with a relaxing sound and a wonderful vocal melody. I also particularly enjoy the beauty of the subject matter, as I get to think about meeting my Savior face-to-face one day as He welcomes me. "Sweet Rivers of Redeeming Love" is a solid track, as well, though I'm fonder of the rather simple chorus than the rest of the song, truth be told. My favorite of the bunch, however, is "Dear Refuge of My Weary Soul." The word "pretty" comes to mind as a description of much of the song. The song contains lyrics that are easily applicable to many (maybe all?) Christians: "But oh when gloomy doubts prevail, I fear to call You mine, the springs of comfort seem to fail and all my hopes decline, when in the dark Lord help me see, when deaf give me Your ears, oh brighten up this world to me, and let me find You here." Their newly-written chorus adds to the wonder: "And oh my Lord, to You, when waves of trouble roll, I'll come."

When Wayfarer released their first EP, The River, I liked what I heard, but I wasn't sure if they were a band I would continue to keep track of. With Sing My Welcome Home, they've established themselves as one of the best worship bands of today. Though the album does suffer slightly from some underproduction (for instance, some of the vocals seem minorly distorted and maybe a little too echoey), it's nothing that can't be fixed with future releases. Sing My Welcome Home is an easy purchase for fans of 60s and 70s rock, but indie and worship fans should pick it up as well. Pacific Gold is a welcome addition to my library.

I have to admit: the common practice among contemporary worship bands to appropriate classic hymns and either change the melody or add an unnecessary chorus has always seemed really obnoxious to me. As a result, I was not initially enthusiastic about the premise behind Pacific Gold's new release, but in the end I was pleasantly surprised. Instead of borrowing words and melodies from famous and familiar hymns, Sing My Welcome Home is full of lesser-known sacred works that have been "repurposed" in a thoughtful and respectful way. In this way, it serves as an introduction of sorts to songs that may have otherwise been forgotten. Musically, the album is laid back and pleasant, with the occasional (and not accidental) Sherwood influence cropping up from time to time. The melodies range from strong and memorable ("I Will Know Him") to perhaps a little dull ("Sweet Rivers of Redeeming Love"). In fact, the album as a whole occasionally seems a little too serene and ephemeral. There's a lack of any real punch or emotion to much of the music, and that's partly due to the rather ethereal/echoing production in the vocals and the simplistic nature of the instrumentation. But overall, Sing My Welcome Home is an effective and creative re-introduction to some classic hymns that definitely deserves a few spins. - Review date: 4/1/15, Timothy Estabrooks