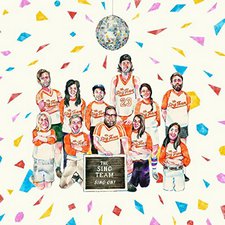 The Sing Team
Sing On!


Brian Eichelberger is a singer/songwriter who came out of Mars Hill Church with artists like Dustin Kensrue and Kings Kaleidoscope. When he joins forces with his veritable choir of friends and family, they become an entity appropriately known as The Sing Team. With no more than a short EP and a Christmas EP a few years ago, the team hasn't begun building the same sort of legacy as the other Mars Hill bands. But after five years, and with the help of Gospel Song Records, The Sing Team is at it again with a brand new album called Sing On!

One thing I've always liked and admired about the ex-Mars Hill bands was that they put a lot of emphasis on classic hymns while arranging them in a new and fresh way - a way one may not have heard before or could have dreamed up. They also each have their own signature style, standing out even from one another. The Sing Team is no different. Ultimately, they're a pop rock band, but their infusion of southern gospel and hint of Electric Light Orchestra give them a unique flavor that's really catchy and singable. The Sing Team ends up not just being an appropriate name because of its many singers, but also because the songs are arranged in such a way that they could easily be slipped into corporate worship sessions. Bands like Kings K and Citizens & Saints make great art that glorifies the Lord, but most churches wouldn't easily be able to adapt their songs/arrangements quite like those of The Sing Team.

Sing On! features nine tracks, one of which is an instrumental. My one gripe about this is that the songs are mostly songs that the aforementioned bands have released recently. One of the songs, "What A Friend We Have In Jesus," was even originally released on the team's 2012 EP. Though, to be fair, it's a great song that fits the album and even adds a little bit of beef to the tracklist; I'd even say it's one of my favorite songs on the whole album. There are also plenty of other great moments here, though. "Love Lifted Me" might be my favorite song here; I've definitely put that song on repeat a few times. The Sing Team's rendition of "Amazing Grace" is also fantastic. With the subtitle "I've Got A Reason To Sing," the team adds a short but lovely chorus in between verses: "I've got a reason to sing and celebrate, I was bought by His blood and amazing grace." The usage of strings and pianos and acoustic guitar in a lot of the songs almost gives off the feeling of friends gathering around in a living room to praise God.

When I first heard Oh! Great Is Our God!, I didn't think much of The Sing Team. After another chance, and subsequently several repeat listens, I got really excited about a full-length album. Though the wait has been long, it has been worth it. Sing On! has grown into one of my favorite worship albums of the year, if not my favorite. I don't expect everyone to love it as much as I do, but the simplicity and heart behind the recordings and arrangements are truly wonderful. You'd do well to check this out!

If you followed the musical wonders of the former Seattle church Mars Hill, you may know that some incredible art came from that local body of believers. While bands like Citizens & Saints and Kings Kaleidoscope have been particularly active since the church closed its doors, a personal fan favorite, The Sing Team, has been quite dormant. But as of September 15th, the band has chosen to Sing On!

Opening the album is the upbeat "To God All Praise and Glory." It's musically optimistic and theatrical in nature, while not becoming pretentious whatsoever. Sounding more like a track from ABBA, a solid 70's influence permeates through the track with warm horns and welcoming strings. "Amazing Grace (I've Got A Reason To Sing,)" "All Creatures of Our God and King," and "What a Friend We Have In Jesus," all carry that vintage communal feel that made The Sing Team's debut EP so appealing years ago.

On the opposite end of the musical spectrum we get to experience a musically-darker side to the group with "Just as I Am." The track is stunningly lo-fi and gritty. It's almost as if they took a beautiful hymn, wore it for several years, threw some dirt on it and said, "This is how a hymn looks after you wear it and it becomes real to you." Without a doubt, it is one of the band's greatest works. Concluding the album is a song that seemed to resonate from the former Mars Hill, "In Tenderness." Citizens & Saints made the aged hymn popular on their debut album, but with a more aggressive anthem-like style. The Sing Team's rendition feels lamentingly bittersweet, almost as if sung at a funeral. Even while singing along, as you drive in your car, you may be moved to tears by the truth of the lyrics and the deeply emotional instrumentation that is translating that truth.

The Sing Team were once labeled as a worship band that had "influences from Motown to The Muppets." While that may have deterred some listeners from giving this group a solid listen, for this reviewer, it only created absolute intrigue. Their relative quirkiness and sincere sense of community translates beautifully into music - capturing both playful joy and deep conviction. If you're looking for a soundtrack for Fall or better yet, a reminder of the gospel set to music, look no further. I look forward to continuing to sing on with such a wonderful band of friends. Well done, Team.