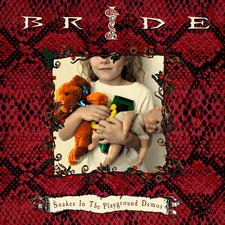 Bride
Snakes in the Playground Demos


Indie music retailer and record label Girder Music keeps proving themselves to be an 80's and 90's Christian music fan's dream. For several years now, they've been re-releasing classic Christian rock albums on vinyl and remastered on CD, often including rarities or exclusive bonuses like trading cards and inserts. It's a beautiful thing. Working with Retroactive Records, one of their newest offerings - following the regular studio album's debut release on vinyl - is a brand new Bride project titled Snakes in the Playground Demos. It's a 12-track collection of previously unreleased rough and raw recordings of some of Bride's most beloved metal songs, spanning the years surrounding their Snakes in the Playground and Scarecrow Messiah albums. Supposedly, all of these demos were recorded for consideration to be included on 1992's Snakes in the Playground, but fans will quickly notice that several of these songs would later feature on 1994's Scarecrow Messiah. And what's most interesting about that is how distinctly different those albums feel -- even in demo form.

A release like Snakes in the Playground Demos is kind of a double-edged sword; for one, every diehard fan would want to get their hands on demo recordings of some of their favorite songs, even if it's just to get a peek behind the proverbial curtain to witness some of the creative evolution that went on behind the scenes. On the other hand, these recordings are rough and unpolished - sometimes even sloppy - and it begs one to wonder just how often they'd actually revisit something like this. For example, the lead-off track is a demo for one of the best songs on Snakes, "Would You Die." It's a vastly different presentation of the song that is missing most of the "teeth" of the finished version. The production is really weak - again, because it's a demo - and vocalist Dale Thompson even sings it differently (it's more shouting than singing). It's also missing the song's characteristic background vocals and some of the guitar. It comes out almost sounding like a live recording of the song since it's stripped back and missing the studio version's layers. And, again, there's really nothing wrong about that -- it's a demo, after all, but this one will leave you wanting to just listen to the finished version instead.

The title track, "Rattlesnake," is next, and fares better than the opener, but the production robs the song of the beastly guitars that make the song rock so hard. Things shift dramatically for "Somethings Never Change," which has considerably better production, and Dale sings more than just shouting. It's a different cut of the song that will definitely be worth playing again. "Same Ol' Sinner," a song that ended up on the band's End of the Age compilation, has better production as well, but it's still kind of a cheesy song and, no thanks to the harmonica, pales in comparison to the tracks around it. The powerful ballad "I Miss the Rain" is represented here with a completely different take, offering more of a full-band sound, added guitar, and alternate lyrics. It's nowhere near as good as the final version, but it's an interesting take for sure.

"Beast" and "Scarecrow" would later make it onto Scarecrow Messiah, so it's a little trippy to hear these songs among the Snakes tracks. If these songs really are from the same recording sessions as Snakes, it's fascinating to hear Dale approach them vocally so differently than the rest of that album, using a lower, more gravelly approach. "Pyramid" may be my favorite track here because it feels more like a b-side than an alternate version of any tracks we're familiar with. It has some similarities to Snakes' "Dust Through a Fan," even using some of the same guitar licks and one complete verse. The chorus is entirely different and has an almost Stryper vibe to it. "Place," also from Scarecrow Messiah, is a solid demo and very close to the version that made it onto the final record.

I'm not really sure why "We Dont Need No Colour Code" is on here, as it is a compilation contribution for A Steve Taylor Tribute: I Predict A Clone in 1994. But while it's not a demo, it is a rarity and has a more raw sound that makes it fit pretty well in this track list. It's all downhill from here, though, with "Sleepy Southern Town" having a strong country sound that sounds way more like Dale's solo work than anything we'd normally hear from Bride. And then a second demo of "I Miss the Rain" closes out the record on a sour note. It features layered vocals that don't mix well, with Dale's growly vocal in the pre and main chorus, and a metal guita solo, also not fitting well together at all. The other demo, and the fantastic studio album version are much better. Still, I understand if they wanted to include it just for kicks here to show the artistic progression of some of these songs.

In the end, Snakes in the Playground Demos is a real treat for diehard Bride fans and completists. I'm not sure how much mileage listeners would get from it, or how much replay value it has, but longtime Bride fans are likely to find a few new favorites in this bunch.