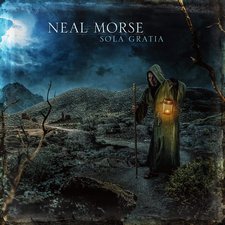 
Reviewing any Neal Morse album is a grand undertaking. This is both due to his grandiose musical productions, as well as his under-the-radar presence in the Christian rock scene. In this reviewer's opinion, he has produced some of the most technically proficient and sonically diverse albums to ever grace Christian music, yet he may be the most accomplished Christian artist you've never heard of. Starting his progressive rock career over twenty years ago in the modestly well-known prog outfit (and brilliantly named) Spock's Beard, he underwent a radical conversion to Christ which led him to begin writing as a solo artist. Morse was joined by Ex-Dream Theater drum-legend Mike Portnoy forming a dynamic-duo of sorts, until 2015's The Grand Experiment saw Neal forgo the solo creative reigns and include young shredder and vocalist Eric Gillette, Portnoy, and others in the writing process. This newly formed "Neal Morse Band" proceeded to create the masterpiece A Similitude of a Dream, which along with its sequel counterpart The Great Adventure, take you on a musical journey through John Bunyan's classic, "Pilgrim's Progress." Morse's musical approach is somewhat of a musician's dream. Essentially, it asks "why not?" From genre-swapping multiple times within a song, to creating a thirty-minute epic, there's a no-holds-barred attitude. Refreshingly, while others in the genre seem to lose clarity and memorability in favor of letting loose instrumentally, Morse always seems to strike a balance between virtuoso musicianship and ear-catching melodies.

With that as a backdrop, let's talk about Sola Gratia. 2020 began with Morse writing a concept album about the Apostle Paul - when quarantine hit, and Morse was challenged to complete the writing alone in his home studio. With the traveling challenges, the rest of the band recorded their parts virtually, but did not have a hand in the writing process this time around. Sola Gratia centers around the Apostle Paul, specifically his life as a pharisee, persecution of Christians, stoning of Stephen, and subsequent Damascus-road conversion. This concept album, like many of Morse's before, follows what could be called a broadway-show-timeline - including an intro, overture, intermission, and unfolding the story track-by-track. Also like many of Morse's previous albums, Gratia is bolstered by short musical motifs that reoccur throughout, the most memorable being a mysterious 3-note pip that forms the main riff in lead single "In The Name Of The Lord," bringing cohesion and interest. The album begins with "Preface," which interestingly calls back a melody from 2007's homonymous Sola Scriptura, and flashbacks between these two "Sola" albums are woven throughout, highlighting the similarities between Luther and Paul... "Long before Luther wrote his words upon the door/there was a man who forged the way before."

One thing that always impresses me about Morse's style is his connection between story and musical emotion. This is clearly present throughout the album, and must be heard to be fully appreciated. In the instrumental "March of the Pharisees," you can almost visualize the high-and-mighty pharisees hobnobbing through the streets of Jerusalem. Likewise, the satirical follow-up "Building A Wall" masterfully portrays the pretentious crowd by using a self-aware vocal melody equivalent to a jesting toddler's *nah-nah-nahnah-nah*... "We want separation here/we're building a wall/cause it's cut and dried/don't let nothing slide."

The album flows well and musically fits the story to a tee, though the lack of having the full band involved in the writing, instrumentation, and vocal department does take a bit away from the extremes that made the previously mentioned masterpieces so effective. Perhaps I'm a bit spoiled; there's no song that ranges past the 10-minute mark this time around, yet a few of the longer tracks on the album (specifically "Overflow" and "Never Change") don't have the same attention-keeping diversity we're accustomed to hearing from Morse, causing these tracks to slightly overstay their welcome. Neal's vocals, while shrill and unrefined, are utilized primarily as tools for character development, as he alone handles vocal duties on the album. This makes listening with lyrics in hand recommended as it is a bit difficult to know which character is "speaking" at any given time. That being said, the storyline is tastefully told in Morse's trademark playful style. Of special note is the musically stunning and lyrically creative "Seemingly Sincere," which includes a breathtaking solo section from Morse and Co, and "The Light on the Road to Damascus," which audibly depicts Paul's conversion in a way few other artists could pull off. Post-conversion Paul appears in "The Glory Of The Lord" and, while its call-and-response verses feel somewhat "mailed in" and don't have quite the finesse and emotional lift we're used to hearing from Morse, a scorching guitar solo by usual-axe-man Eric Gillette (his lone solo on the album) brings with it a hint of the glory of past "full-band" projects. Touching closer, "The Great Commission" sees Jesus get the last word, before peacefully fading out to one of Morse's distinctive piano outros "I will be with you/even when they hurt you/I will be there."

With Sola Gratia, Neal Morse has further cemented his legacy as premier in the progressive rock genre. Now in his mid-sixties, he shows no sign of slowing down, and I for one hope it will help him finally get the recognition he deserves. Though this album doesn't quite reach masterpiece status, mainly due to the absence of the entire band's writing prowess, an only "solid" Morse album still demands attention and is immensely enjoyable. Future listens will undoubtedly unveil new nuggets of brilliance, making Sola Gratia a worthwhile investment.