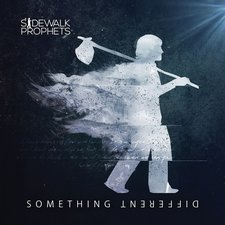 
After a loud burst onto the scene with their debut album, These Simple Truths, and a less exciting follow up, Live Like That, many are undoubtedly curious to hear what Sidewalk Prophets will do next. The title of their third record, Something Different, suggests this album will be fresh and unique, but in actuality it is largely similar to what they've been putting out: safe CCM based pop/rock. While there isn't anything deep or innovative here, there is plenty that is enjoyable and encouraging.

Many songs on Something Different are primed for radio play, and though they are often pleasant to listen to, they tend to stick too close to the tried and true formula. "Prodigal" shows promise with a driving drum beat intro, but brings little to the prodigal son story that hasn't already been done by countless other Christian artists. The mid-tempo "If You Only Knew" finds listeners in the middle of a conversation between God and a doubting person. It's a nice concept, but the questions the person is asking to God are set up too perfectly to be impactful. "Impossible" also falters lyrically with a chorus that awkwardly uses the words "impossible" and "possible" a couple dozen times too many.

There are a few decent cuts that are more intriguing musically and authentic lyrically, but they aren't as memorable as their radio-ready counterparts so it's hard to say they are bright spots on the album. Layered with an acoustic guitar, quiet drums, xylophone, and piano, "Everything In Awe," is a beautiful song about everything in the universe--living and non-living--being in awe of God's majesty. Towards the end of the song, there is a triumphant burst of energy created by fuzzy electric power chords and powerful drums that works well. "To Live Is Christ" opens with a similar reverent tone that characterized "Everything In Awe," but it becomes more predictable as the song progresses. As the title implies, this song is based on the verse from Philippians 1:21 where Paul wrote "for to me, to live is Christ and to die is gain."

The album's best moments are tucked away at the end of the album. With an inviting back porch vibe, "Ain't Nobody (Till You're Loved)" challenges listeners to put their money where their mouth is in regard to loving others. More than its sonic deviation from the rest of the album, what makes this song stand out is the tangible sense of fun the band has playing this song and the wholehearted delivery of the message. "I'd Rather Have You" (on the deluxe edition) is another highlight, with passionately sung lyrics, a fun rock sound with a subtle nod to the 80's, and a catchy chorus. Though it relies a too heavily on overused Christian phrases, the anthem "Soldier On" (save for the long intro) is another strong tune which showcases Dave Frey's impressive vocals.

These few stronger cuts aren't enough to carry the album, so in the end, Something Different is a collection of mostly standard but likable CCM tunes. This album will churn out a few solid radio hits, but as a whole, it is lacking in artistic vision and lyrical depth.