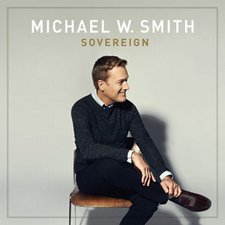 There are some times when we do something uncomfortable. Sometimes, we decide to try something we have never tried before and it is all new to us. We look in awe and wonder at whatever it is, moving out of our comfort zone and normal routine into territory we simply have not considered. Take as an example some certain someone who, after over three decades of calling their own shots, making their own stuff, and working with familiar people, decided to venture into territory they simply have never entered before. But, in all the newness, wonder, and exhilaration that it brought them, they failed to realize that to many objective outsiders, this move, which was a genuine risk on their part, didn't appear to be much of a risk at all. Unfortunately, I see this as being the case with Michael W. Smith's latest studio album.

So what did Smitty do on Sovereign that he has never done before, and where and why did it fall flat? Well, first of all, he has moved on from the only record label he has ever been signed to, Reunion, and over to Sparrow Records (the former longtime home of Steven Curtis Chapman, who recently switched to Reunion). In addition, he worked with an ensemble of co-writers. Granted, in the past, Smith has not always written his own lyrics (most notably his live worship projects, which were mostly covers), but he had always had people like Wayne Kirkpatrick or Amy Grant to co-write with (or even his wife Debbie on his 1983 debut, who co-wrote arguably Smith's most popular song, "Friends"). This time, Smitty features five covers to go along with seven original songs co-written with various others, including Jason Ingram, Seth Mosley, Mia Fields, Christopher Stevens, Kyle Lee, Michael Farren, and son Ryan Smith. Mosley, Stevens, and Lee also joined Jeremy Edwardson as part of Smitty's new production team. The fact that this is Smitty's first studio worship album featuring original music rounds out the aspects of the album that were areas of relative discomfort for Smitty.

The overall result is an album that caters far too much to the mainstream CCM contemporary worship crowd with too little creative appeal outside those confines. "You Won't Let Go," "You Are The Fire," "Christ Be All Around Me," "Sovereign Over Us" are all wonderfully, vertically-minded, accessible songs which unfortunately are below the abilities of an artist or Smitty's caliber. The Worship Central cover "The Same Power" in particular is an excellent example of the type of generic arrangement, lyrics, and structure that simply has rarely been present on his previous albums, yet occurs time after time on Sovereign (That said, its inclusion was mainly due to Smitty's experiences when performing the song live, so its main fault may simply be a poor transition to the studio). I also find "Christ Be All Around Me" an interesting selection, having been featured on All Sons & Daughters' self-titled album released last week (and not being a standout track on that album either) and being transformed into a big studio production number. (Furthermore, it is the title track of Leeland's forthcoming live EP which also features Smitty.)

In spite of its faults and generic tendencies, however, the fact remains that this album was made by the one and only Michael W. Smith, which is something that no other generic worship album ever made has going for it. When in doubt, songs like "Sky Spills Over," "Miracle," and "All Arise" serve as a reminder that Smitty has incredible musical and artistic abilities, and his earmarks are all over the album in the production, musical layers, vocal performance, arrangements, and even dramatics. In that regard, this is Smitty's most accessible and production-heavy album since Healing Rain, a solid album in and of itself (though far from a standout in Smitty's catalog), and it will undoubtedly remind many longtime listeners of it. And wrapping things up is possibly the album's biggest highlight, a gorgeous duet with Kari Jobe on extended outro "The One That Really Matters."

Once all things are considered, is there any real reason for longtime Smitty fans or the CCM crowd to dislike Sovereign? In all honesty, probably not. The strength of Smitty's abilities is powerful enough to make even an otherwise unremarkable album into a worthwhile listen. Most of Smitty's longtime fans will be more than satisfied with the album, and may appreciate the direction Smitty traveled more than this particular reviewer. And being even more honest, I really do love the fact that Smitty is continuing to try new things and take input and ideas rather than settling into his own little groove formed by 30 years of experience and hard work. However, I dearly wish he would have chosen a different "new direction."