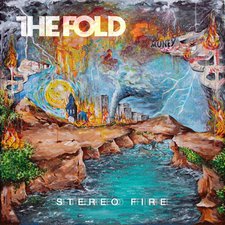 
Chicago-based band The Fold is no stranger to fans of indie pop/rock or parents with younger children, having released six full-length albums, 30+ LEGO Ninjago tracks, and songs for the NFL as well as a World Series anthem for the Chicago Cubs. So it comes as no surprise that a new full-length release by the band would garner a lot of multigenerational excitement that the band does well delivering on.

The Fold has crafted a group of songs in Stereo Fire that embodies a generation that is the audience that they've amassed through their heartfelt music and their ability to write undeniable anthems -- anthems that were the soundtrack to cruising smalltown USA roads on carefree summer nights. This successful formula is as evident as ever as the band has masterfully crafted a selection of songs that flow from pop anthem to indie rocker to fun punky angst across its 47-minute runtime.

Thematically, the band offers a return to the heavier subject matter from earlier albums, like Secrets Make You Sick. The album opener "World Gone Mad" tackles loneliness during a pandemic, while the next song, "Behind Us Now," dives into feelings of helplessness and trying to balance that with hope for the future. Thankfully, there are lighter and more encouraging moments sprinkled throughout as well, such as the infectious energy of "Going Under," the prayerful "Recovery," or the aptly titled "Nostalgia," where the band offers some of their best work. The double track "A Place Where I Can Breathe/The World You Made" summarizes the ultimate message of Stereo Fire's challenges of life and taking responsibility for our actions with lyrics like, "This is the world you made and it's bigger than you. These are the words you said, everyone made a difference."

An unbiased and fair review would not be without critique, and for me, it would be the beforementioned flow of styles. This admittedly could be due to this reviewer's disposition to gravitate more toward the indie pop/punk style that The Fold does so well, however, this could make it hard for a listener to stay engaged for the whole breath of the album. There will be others who disagree with me and that is perfectly reasonable, as stylistic differences will always be an important distinction.

Overall, The Fold has landed another solid entry into their discography. Fans of their previous work and the indie punk genre will find plenty to appreciate. Even if it is far from groundbreaking, there are a few songs that will definitely find heavy rotation in my favorite songs of 2022 list.