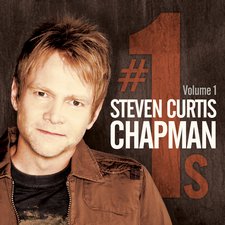 It's been 25 years since listeners first fell in love with Steven Curtis Chapman's music. Since then, the acclaimed singer/songwriter has earned 46 No. 1 radio singles (including "Do Everything," from his most recent album re:creation, which topped charts last month), 56 Dove Awards and five GRAMMY awards. To commemorate this incredible career (which has also spanned 17 albums!), Chapman is celebrating his radio success with a new album series, titled #1s, which will include every one of Steven's No. 1 singles. The first volume includes 13 songs spanning seven studio albums from 1989 to 2007.

Choosing radio singles as a way to construct a hits collection is a neat idea, and one that's fairly unused in the Christian market (Until now, that is; BEC Recordings also released a collection of Jeremy Camp's radio hits just last month). However, any hits collection that spans over a decade is liable to suffer from the most common problem these collections can have, and that's continuity. While you can listen to #1s Volume 1 and understand why each song has made this compilation, it can be a bit jarring to hear a song like 1999's "Dive" and then immediately be transported 10 years earlier to 1989's "More To This Life." Both are excellent songs, but in 2012, a song like "More To This Life" is unmistakably dated. Even the iconic love anthems "I Will Be Here" and "Go There With You" (released in 1989 and 1992, respectively) are sandwiched between "Speechless" (1999) and "God Is God" (2001); the latter two do not sound nearly as dated.

Still, true music fans--and fans of Chapman specifically--can't get the full picture of what kind of career this incredible artist has led without hearing his earliest works. "More To This Life," "Go There With You," and "The Great Adventure" are arguably the most dated tracks of these thirteen, but indisputable classics. While I, personally, probably wouldn't pop in 1989's More To This Life today (particularly out of SCC's catalog, with so many great recordings since then), these songs are still great listens and quintessential Steven Curtis Chapman songs. When you place them in the same breath as "Lord Of The Dance," "Dive," "Speechless," "Magnificent Obsession" and "All Things New," it's just a solid collection of SCC gems.

With the dated aspect aside, let's be honest; if you've been following Chapman for the past couple decades, you probably have all of these songs already. If that's the case, it's easy enough to either buy the few singles you maybe don't have from a digital retailer and make your own mix of hits (or better yet, a playlist of all 46 No. 1 singles), or just make your own mix CD of these 13 songs from your existing library. However, #1s Volume 1 really is ideal for the more casual listener of Chapman's music who has never taken the chance to pick up any (or many) of his albums. If you're a radio consumer, this collection is for you. Also, if you've only started listening to SCC in recent years or stopped earlier in his career, #1s Volume 1 is a great way to be properly introduced to some of the artist's best work, or to simply catch up. With, assumedly, three more of these volumes on the way, there will be plenty more Chapman favorites to check out as the retrospective continues. Still, I can't help but wish there was something unique to this project. Chapman has been releasing videos on his website of him talking about one of his hits and then playing it acoustically right afterward. His plan has been to release twenty five of those over the course of 2012. It would be great to see some of audio from those sessions included on these releases as bonuses.

In the end, while we are firmly set in the digital age, a release like #1s Volume 1 seems a bit unnecessary, but it still serves as much deserved acknowledgement to the career of one of CCM's most beloved artists, and a reminder as to why Steven Curtis Chapman is one of our favorites.