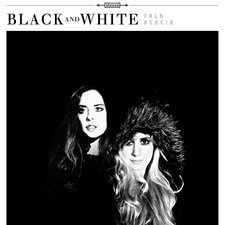 It's always a pleasant surprise when an old favorite makes a comeback, and listeners have seen plenty of these wonders in the last several years. But what's even more special is when an underappreciated artist gets back up after a lukewarm first round and goes for another. Tal & Acacia never hit the big time with the major label-released Wake Me in 2009, but when their fans rallied around to raise the funds for a second record, Black and White became a reality nearly four years later. The best part is that it's among the worthiest of follow-ups.

In retrospect, Wake Me fits the bill as a quintessential pop album far more than Black and White. With exaggerated beats, bubbly melodies (as found in "Top Priority," "Clearview," and "Merry Go Round") and some slower tracks for good measure ("Yahweh," "Drifting Away," "Warrior Child"), Wake Me covered all the bases in a clean, polished fashion. By comparison, then, Black and White feels like a far more risky effort that exercises a "less-is-more" approach. From the start, Tal & Acacia's simmering vocals fill the ears in the short intro "Welcome" that sets the tone for the record. The album could very well be performed in a coffeeshop in its intimacy and peacefulness, unlike the forthrightness of "Top Priority" on Wake Me. "Once Upon a Time," "That's Me," and "All In All" are the most upbeat in the mix here, but even these tracks major on reserved harmonies and contained excitement that feels more matured and balanced than previously heard. The subtle bass lines and simple percussion parts keep the groove moving and alive, and it delivers with a quieter nuance that few pop albums use. Despite a less-produced approach, however, it never feels unfinished or "demo-esque" like many indie bands sometimes unwittingly demonstrate. The Kickstarter funds certainly paid off.

One of Tal & Acacia's main strengths has always been their use of vocal harmonies; even with the elementary pop nature of Wake Me, the vocal style throughout was a unique trait that kept things interesting even when the song wasn't the strongest. Instead of establishing one voice as the lead and the other as secondary, both complement each other consistently, often in unison, and this strategy is even more apparent on Black and White. It only makes lines such as "Jesus, please, I can't live without Your love/and the storms can roll over me again/but I'm not going nowhere to lose such a friend" ("Once Upon a Time") and "You say, 'I will not give you a stone when you're asking for bread/I will not leave you alone when My child is crying'" ("Stone") that much more evocative. The airy atmosphere creates plenty of room for the sisters' vocals to shimmer and make the music they create their own. "Ninety-Three" is especially evident of this effect, where the vocals become instruments themselves with carefully placed "oohs" and "ahhs" accompanying the piano in the background to personify spiritual presence. But even when only one sister carries the main load of the song ("Stone," "Hands"), the other isn't ever left out of the picture, and two share the labor in a remarkable way that few sibling bands do.

In short, Black and White is cohesive and airtight in production with purposeful orchestration throughout. Some could be disappointed that it's not a true continuation of Wake Me's style with fewer radio-friendly tracks and more sentiment in the musical atmosphere. If there are any missteps to mention, the album seems to slow down pretty early on with the bluesy and drawn-out "Stone" and "Ninety-Three," following the upbeat "This is Love" and "Once Upon a Time." The former two are the longest tracks on the record, and they keep the energy compacted just a little too soon in the tracklisting. One could also argue that the album doesn't fluctuate very much in terms of volume with fewer "big" moments and more steady flow through the project. However, these sorts of issues become less noticeable after every listen.

After almost four years, Black and White was worth the wait. While not as sugary sweet as Wake Me in its overall appeal, the sisters' second go-round progresses above and beyond their debut in reservation and serenity, painting a vivid work of art that's all their own and full of redemptive joy. It only cements the sisters as one of the smartest pop acts to come around in years, and the album stands as one of the first true "must-haves" of the year. Another Kickstarter success story for the books, Black and White wastes no time in portraying the daring power of creative independence. class="coversize" align=right> Early Thoughts...
For reasons still unknown to us, Tal & Acacia never really quite took off with CCM listeners; though Wake Me was a thoroughly skillful debut with plenty of potential to build upon, the sister-sister duo parted ways with Essential Records to traverse the waters of independent musicianship. Almost four years later, the sisters struck gold with an ambitious Kickstarter campaign for a second album, and Black and White is almost upon us (and for the Kickstarter backers, it's already here!). Listeners could be a tad surprised with about half of the album being ballads ("Stone," "Ninety-Three," "Apart," "God Knows," "Hands"), but the good news is that they all sound polished and slowed down for just the right effect. In fact, the entire record, including the upbeat moments of "Once Upon a Time" and "That's Me," carries a minimalist, almost "coffeehouse" feel, akin to indie favorites Feist, Death Cab for Cutie, Bright Eyes, and Tegan and Sara. In the process, Tal & Acacia have solidified their pop approach for the better, capitalizing and improving upon on the sounds of Wake Me's "Yahweh" and "Wake Me (Noah's Song)" and thankfully less on the side of "Garbage In" or "Top Priority." While Tal & Acacia's Kickstarter supporters (such as yours truly) are already enjoying Black and White's pop sensibilities, everyone else has quite a bit to look forward to later this winter. Get ready for what will certainly be one of the most accomplished pop albums this year... --->

Only a few years ago, Tal & Acacia released Wake Me, a lighthearted approach to alt pop that, despite a fresh sound, never reached its full potential with CCM audiences. Thankfully, with the help of some Kickstarter supporters, the sisters are back with Black and White, building on what their debut began and honing a gentler, more laid back sound that fills a void in current Christian music. Wake Me had its share of shining moments, but in time, the sonic novelty wore a little thin, leaving the record a good experiment hinting at what they could be. A few more years have developed Black and White's sound into the album Wake Me should have been. Tal & Acacia seem more comfortable and in their element here, settled into an easygoing, sparsely arranged style of indie pop. Gone are the self-consciously quirky arrangements of "Garbage In" or "Merry Go Round"; here the songs are stripped to their basic elements. Think soft percussion and guitar, sparse piano, subtly catchy melodies, and the airy harmonies that defined their debut's best moments. This record shows off their softer side, from the swaying piano soul of "Stone" to the ethereal vocals grounding "Ninety-Three." When the upbeat groove does make an appearance, the effect is still slowed down and reflective, as "Once Upon a Time" and "Shoulders" display. The songwriting itself shows improvement as well. Where Wake Me sometimes erred on the side of cliché, Black and White has a more mature lyrical craft. Vulnerability shows, like in the love song "Apart" and "God Knows" which talks about "all my doubts and all my fears and how I've fallen." Scripture based songs "Stone" and "Ninety-Three" are other standouts that breathe a little new musical life into some well known verses. Black and White turns out to be just the right release for the transition from winter to spring: chilled out enough, yet fresh and light for the warmer days ahead. This solid batch of songs makes a great comeback from a duo worth rediscovering. - Jen Rose, 3/3/13