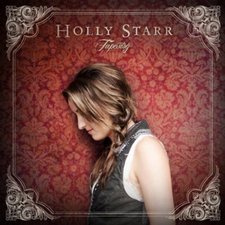 Quincy, Washington isn't exactly a hotbed for fledging musicians; with a population of fewer than six thousand people and terrain comprised of mostly farmland, there isn't an especially growing field of on-the-rise singer/songwriters. Holly Starr changes that. Production courtesy of Rusty Varenkamp (who's worked with the likes of Tenth Avenue North and Meredith Andrews), Starr's second studio album, Tapestry, proves to be a reasonably constructed project, but not without quite a bit of room to grow.

At 19 years old, Starr has already come a long way from her youth group band roots; with a variety of both upbeat pop songs and slower ballads for good measure, Starr uses the entire record to showcase her talents instead of settling for one style. The vocals found on Tapestry are more or less suitable for her pop approach, but they do feel a little flat in some areas. Sometimes they seem a bit held-back to keep from being too flamboyant in their delivery, but instead it can feel muffled in some ways. Auto-tune is very obviously and shamelessly utilized on some tracks (and they're especially apparent right in the first thirty seconds of the opening track, "Undertow"); while its application isn't horribly out of place, it's painfully obvious to the point of hindering the vocals and not helping them. Starr's Christian pop sound isn't all too groundbreaking, but for the target audience, it works for what it is.

However, from a songwriting perspective, there's some great material to show here. "What Is Love" demonstrates the struggle of resisting faith's complacency, while "I'll Watch You Dance," written from God's point of view, displays the Lord's timing as something the Christian has to wait on, ("I'll watch you dance/when you see the plans I've made for us/will you take my hand?/I love you"). These two songs are by far the best implemented on the record, but it's disappointing when some of the more upbeat tracks feel secondhand and unremarkable in their sound ("Undertow," "Come Close," "Holding On To You"). "Surrender" sounds more like it's been taken from a page in a teen's devotional book than it does an inspirational song ("Missed opportunities and second chances/when we hold back we don't react to why you're calling us/it's time to make a change, so let's do something/it's why we're you're here/you're the cure for this complacency"). "I Love You Anyway" is especially frustrating; while the theme of loving fellow Christians who have wronged us (or wronged them) is quite an admirable one, the awkward phrasing (that sounds more like praising the singer than the trait the listener should inherit from the song) ruins the potential impact on the listener ("There will be times I remember the things that you did to me/but I will choose love and forgive you for everything.").

When looking over Holly Starr's Tapestry, it has its shining moments, but it's hard to honestly say there isn't better out there in the pop genre. Charmaine, Tal & Acacia, and even Eisley and Francesca Battistelli (with whom Starr shares her national release date) feel more proficient in their execution, and Starr's current course pales in comparison. Starr's sound is bound to mature and improve, but until then, it's more worthwhile to look into better-woven records than Tapestry.