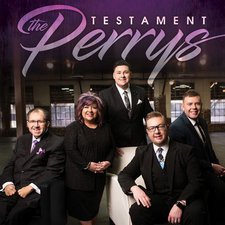 
The Perrys, a southern gospel vocal group, has existed in some form or other since 1970, when the group was started by Libbi Perry Stuffle. The group soon included Tracy Lee Stuttle, who became Libbi's husband, and most recently includes the couple's son, Jared. The five singers that comprise the group are all incredibly talented, carrying on the legacy with 2017's Testament, an album as strong as anything else these singers have done.

The opening trio of songs - "Let's Stop for a Moment," "I Will Pray," and "It's Not Here to Stay" - are notably sweeping tunes, with a palette of sounds that extends from country to yacht rock. Libbi handles a large number of the lead vocal duties, and while her voice is as smooth and emotive as it's ever been, it should come as no surprise that each song's best moments come during the massive, gorgeous harmonies of the whole group singing. When the five singers jump into a key change altogether, the results are moving.

The Perrys should be very thankful for the production treatment they received on this album, too, as the whole thing simply sparkles. It's so polished and clean that there's nary a moment when each voice and each instrument can't be heard as clear as day, from the subdued strings and keys of "Find Me Faithful" to the more rambunctious rockabilly of "Lord Send Me." The latter track might contain the album's only audible flaw, when the bass singer's voice gets inexplicably and awkwardly mixed as the loudest sound during the chorus.

Testament contains a mix of traditional numbers, like "My Hope is in the Blood," and originals well-suited to the band's vocal talents, and of these eleven songs, "Who I Could Have Been" is the best. One of the better songs I've heard this year, it's a lovely number that makes a surprising shift into downbeat to upbeat during the chorus, without losing the somber ache of praising God for "saving me from who I could have been." This song also represents something that this album achieves as a whole: using the sounds, textures, and instruments of southern gospel and traditional country music, while making music that can appeal to fans outside of those genres. Each song has enough vocal appeal that the occasional slide guitar feels more like a pinch of flair and less like a genre distinction.

This album won't be for everyone, and many younger listeners may not be accustomed to enjoying aged voices. But once you adjust to a different kind of musical experience, there's a lot here worth treasuring. And if you're already a fan of vocal groups or southern gospel, then the Perrys' Testament is not an album to be missed.