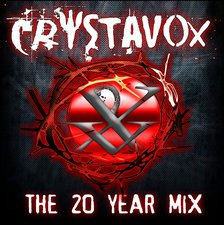 Ask any aspiring rock musician who's honest enough to answer truthfully and they'll tell you that picture-perfect looks, a truckload of talent and countless hours spent honing their craft in Mom and Dad's basement will only take you so far. To really make it big in the business, would-be stars need to have all of those things along with the two precious ingredients that, more often than not, wind up separating the groups who grace the magazine covers from the ones who eventually call it a day and go back to their nine-to-five jobs. Those ingredients, of course, are timing and luck.

The former of these may well explain why Crystavox are one of the best Christian rock bands you've probably never heard. Released in 1990, almost a full half decade after similarly-inclined glam metal stalwarts like Whitesnake, Poison and Night Ranger - and the folks at MTV who played their videos - made the hair metal phenomenon a household word, the San Diego-based foursome's self-titled debut had the dubious honor of hitting the streets less than 18 months before the advent of the grunge movement that would, seemingly overnight, make bands in the teased-hair, spandex-wearing camp seem hopelessly antiquated.

At the time, though, the Southern California quartet's freshman outing was fairly well received by the small, but growing, contingent of Christian music lovers looking for something that rocked a little harder than Russ Taff or Michael W. Smith. "Power Games" and "It's All Right (to Rock 'n' Roll)" were more rock than metal, echoing the slick melodic arena-ready stylings of artists like Bon Jovi, White Heart and the John Schlitt-led version of Petra. Not so with "Sacrifice," whose frantic chugging rhythms and wailing vocals call to mind early '80s Judas Priest. To their credit, most glam metal bands, despite their head-banging tendencies, were savvy enough to place at least one slower song on each of their records for the sake of radio airplay. Enter the acoustically-driven "Home Again," a kissing cousin to soaring mainstream '80s power ballads like "Honestly," "When the Children Cry" and (of course) "Every Rose Has Its Thorn."

The second project, The Bottom Line, dropped in the early spring of 1992, but like many of their hair metal-purveying peers during this time, the band mostly ignored the grunge revolution that had exploded the previous fall in the wake of Pearl Jam's Ten and the genre-defining Nevermind album from Nirvana. "The Big Picture" is pure, unadulterated Dr. Feelgood-era Mötley Crüe. The near-breakneck "Paradise," by far the fastest piece on either of the group's releases, skirts precariously along the edges of what most would consider speed metal. And the blissfully revitalizing "Stick to Your Guns" shows how absolutely invigorating Bon Jovi's "In and Out of Love" could have been minus the sanded-down edges and gloss that threatened to render it all but inert. Even the group's most prominent concession to grunge, "Break Down the Wall" is still a half-and-half proposition - sounding, for all the world, like Alice in Chains covering Ratt's "Round and Round."

Therein lies a good bit of the problem with Crystavox and their contemporaries; they tended to sound a bit too much like the bands who influenced them. Likewise, songs like "Snakes in the Grass" and "Paradise" would have benefitted from more memorable melody lines. And, truth be told, the ballads were more than likely cringe-worthy even when they first hit the airwaves. For all its faults, though, the 12-track 20 Year Mix anthology contains plenty of first-rate material and does a fine job of collecting virtually all of the high points of the band's lone two albums and preserving them for listeners who, even though they may not recall the band itself, still look back with melancholy-filled fondness on the simpler, more carefree, time during which its music was created.