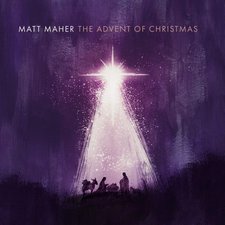 Matt Maher
The Advent of Christmas


Matt Maher is steadily becoming a force to be reckoned with in the worship community. Each new album presents a new hit to stir the radio and filter its way into churches. Although Maher has released Christmas singles in the past, The Advent of Christmas is his first full-length holiday effort, featuring a healthy mix of re-imagined classic carols and new originals. The album tries to encapsulate the spirit of the Advent season by bringing songs about hope, peace, love, and joy while the tone slides around to accommodate different moods. A track or two may be dramatic in their scope; the two that follow are then light-hearted. Though the tone changes throughout, it feels consistent in its context.

The majority of the songs are originals and make this album special, as most of the new tunes work well in Maher's style. "He Shall Reign," "Love Came Down" and "Glory (Let There Be Peace)" are strong tracks in their own right but fit well as songs churches could sing over the coming season. The real standout, however, is "Hope for Everyone," with its upbeat gospel music and message that carries the listener away in the feeling of hope that Christ's birth announced. "Merry Little Christmas" and "When I Think of Christmas" end the album on a more sentimental note and, though unlikely to be used in churches, still touch lightly on the nostalgia of the season and add depth to the overall collection. The biggest head-scratcher among the originals is "Always Carry You." The song immediately sets itself apart due to Maher handing the mic over to Amy Grant. It's a sweet and tender track that seems to be from Mary's perspective (at least, that's the angle that makes the most sense). The reason it doesn't work as well, though, is that it takes a couple listens to understand the message and how it connects to Christmas. It almost feels like a track that was accidentally mixed into the set list but belongs on another album.

On the covers side of things, "Gabriel's Message" carries a gravitas that leads nicely into "He Shall Reign." "The First Noel" and "O Come Emmanuel" are decent renditions, with an added chorus on the former and bridge in the latter that work well with the traditional lyrics. Unfortunately, "Hark the Herald" is hampered by an unnecessary and redundant chorus, which is a shame since the arrangement for the music is fresh and catchy. Maher's jazzy, swing take on "Jingle Bells" is the weakest of the bunch, however. His version feels like a slightly tweaked rendition that someone else did better, and Maher is no Bing Crosby. This was the one track where his voice didn't feel as comfortable or natural.

In terms of general production, the musical styles vary enough to keep the ear engaged, though less finger snaps would have been an improvement. Overall, Maher managed to craft a heartfelt and memorable Christmas album--a feat not easily accomplished. The new songs carry The Advent of Christmas more than the classic carols, but that's not a bad thing. This album captures the inspiring hope of Christ's birth, basks in the peace He brought, dwells on the love He showed, and joyfully revels in what Jesus accomplished. Anyone looking for a soundtrack to add to their collection this Christmas to help get them in the holiday mood should consider Matt Maher's offering.