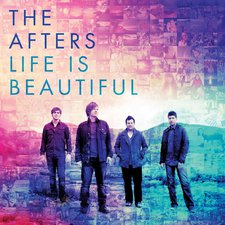 The Afters
Life Is Beautiful

Three years since the release of Light Up the Sky, The Afters haven't kept themselves terribly visible in the industry. After becoming household names with two solid albums that appealed to mainstream audiences, the band released Light Up the Sky in 2010 which attuned the band's direction, mainly radio pop, for the long haul. Life Is Beautiful does little to change that situation, but with twelve tracks speaking to the vast subject of life's ups and downs, The Afters take a decent shot at the always-timely topic.

This being the second album with drummer Jordan Mohilowski and bassist Dan Ostebo, Life Is Beautiful maintains the poppier sound from Light Up the Sky - less on the aggressive, dirty guitars and more on the light synths and fluffy soundscapes. While this description could sound inherently negative, especially when the much-celebrated I Wish We All Could Win and Never Going Back to OK still clearly outshine the rest of their discography, the sound they choose for Life Is Beautiful works appropriately with the subject matter, taking the listener away from whatever situation they are currently in to focus on the message at hand. The most upbeat moments come with the album opener "Every Good Thing" and "Love Is In the Air," songs that do indeed keep the emotions high for artistic measure. On the other hand, "Broken Hallelujah" keeps the picture fair and balanced by speaking of leaving our pain to God when the future feels dubious ("Even I know I don't know what Your plan is, I know you bring beauty from these ashes"), undeniably a relatable topic for many.

An album like Life Is Beautiful gets a passing grade, even if the seasoned band doesn't take nearly as many risks as they should. This being album number four, The Afters should be churning out masterpieces on a reliable basis, and from a musical standpoint, Life is Beautiful can often feel like the same rigmarole as the last time around, which comes as a bit of a letdown with it being the result of three years of songwriting . Tracks like "Find Your Way," the title track, "Waiting for an Answer," and "With You Always" border on the trite and forgettable side, as they just aren't compelling in light of brighter and more polished moments on the record. While they attempt to be in the same spirit of the rest of the record's sanguinity and carry the message along, they merely fill the tracklisting to meet the album's quota and detract from the overall product.

Life Is Beautiful keeps everything in eternal perspective, but sometimes at the expense of a radio-friendly sound that doesn't break much ground. But in the midst of discouragement, disappointment, and overall disarray, an album like Life Is Beautiful speaks directly to these injustices and sets the record straight about the true hope Christians have, exploring both the joys and woes of life with a realistic, but spiritually optimistic, lens. A gentle reminder to listeners of both where their hopes lie and from where their blessings flow, Life Is Beautiful appeals to any believer's walk.

Most mainstream pop right now falls under a category that I like to label "candy pop;" sweet to the taste and addicting, but artificial, lacking substance, and ultimately unsatisfying. This is how I would describe The Afters' sound on Life Is Beautiful. Sure, the inspiring and praiseworthy lyrics are there, but I feel that the made-for-radio songwriting leaves much to be desired in most cases (like, from "Every Good Thing," "Sometimes I forget and take for granted/ that it's a beautiful life we live/ I don't wanna miss the moment like this/ This is a beautiful life you give"). The music really isn't much better as nothing I hear even remotely reminds me of The Afters that we all knew and loved on I Wish We All Could Win and Never Going Back To OK. Even comparing to their last endeavor, Light Up The Sky, I feel they've regressed in that they've tried even harder than ever to broaden their appeal at the sacrifice of almost any sort of artistic achievement. In addition, nine of the last ten songs were all slower, similar-feeling, similar-sounding songs (mostly ballads, though to call them all ballads would not be entirely accurate) that all piled up and ran into each other, and none of them prove to be very memorable. Of course, everything tastes so sweet that it is impossible to not appeal to those most easily satisfied. And there is absolutely nothing preventing any one of these songs from connecting with the listener in a way that they didn't connect with this reviewer. But I must admit that I am growing increasingly disheartened with so many bands abandoning their own unique sound in favor of a broader appeal, and unfortunately, The Afters do so with less success than most. Even when TobyMac forayed into the mainstream pop sound on his latest album, while some of his songs missed, most of it still felt like TobyMac. Life is Beautiful has no semblance of anything we previously loved about The Afters. Those fans that didn't like the direction Light Up The Sky took will probably (if not certainly) want to skip this one altogether, though fans of said previous album will still want to give it a listen. In short, as much as I cringe to make such an obvious pun (but nevertheless absolutely true), the Afters have forgone their vow from five years prior and have gone back to OK. - Mark Rice, 4/10/13