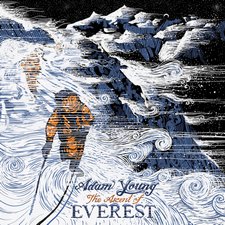 
After parting ways with Republic records, Owl City's Adam Young decided to take this freedom as an opportunity to pursue his first musical passion--film scores. Having released one score each month based on a historic event that has inspired him, Young has not shown signs of hitting any kind of creative slump. The Ascent of Everest is his 4th release, and although it may not be the most engaging release of the series, it's an inspiring and invigorating listen.

In 1953, Edmund Hillary, a beekeeper from New Zealand, and Tenzing Norgay, a Nepalese Sherpa, became the first to reach the summit of Mount Everest. Young's interpretation of this historic accomplishment is a collection of seven playfully epic instrumental tracks. A steady tempo underpins many of these tracks as gritty guitars, swirling strings and frozen percussions dynamically weave in and out to create each song's individual musical theme. Where Young's previous soundtracks told a linear story that was easy to follow along with, Everest is more focused on evoking the feelings of danger the climbers experienced and the perseverance required to overcome these obstacles. Because of this, and also partly due to the nature of the story, the significance of each track might be elusive to the casual listener who doesn't have any background on this historic achievement (with the obvious exception of the final track, "Summit").

Given the fact that all of the music on Young's scores are created from his home computer in Minnesota over a period of three weeks, one can only imagine what he would do if he were to write a score for a big-budget film. If you don't care much for instrumental music, The Ascent of Everest won't necessarily win you over, but anyone who can appreciate a good film score will find a lot to enjoy here.