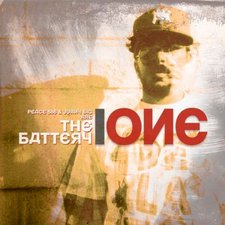 Most holy hip hop fans from back in the day spent their time bumping tunes by the notorious Tunnel Rats crew - whether it was the Rats' Tunnel Vision album, or solo albums from one of the many members of the crew. There was a lot of music coming from that camp, and there has been from Tunnel Rats members for about twenty years. In 2011, producer Peace 586 and emcee Jurny Big (who have worked together before, but not as a duo) have come together as The Battery. Their first release, One, comes from illect Recordings.

Jurny has a style you don't hear all too often in mainstream hip hop these days - that west coast style that you usually have to go into the underground to find anymore. He doesn't really go too hard, as Peace keeps the beats relatively tame, but Jurny takes every opportunity to both flex his style and spit realness. One of my favorite tracks is "Pavlov's Dog," where he takes the beat and works it the way he needs to. The rhyme scheme is solid and, for lack of a better term, catchy (without the poppiness most commonly associated with the term "catchy"). Jurny isn't afraid to speak about his faith, but he also keeps it real and talks about not beating people over the head with Christiantiy. "Vincent Reynosa" is a good track too, but Jurny comes off as more of a poet here than a rapper, which comes from the beat. Half of the track lacks a beat, but just has some music in the background while Jurny speaks. This track features some more truth that I feel like sometimes Christian artists are afraid to speak ("'So how come that again' you ask, 'why it always come down to skills, why there ain't much ministry in what you spill, this bragging gonna kill the youth for real,' well to be honest it does less harm than the garbage you let fall, you target Christian kids cause they're not hard to please at all, in fact I know I have some fans if only be default, they heard I'm on a gospel label so they called....Jesus is my Savior, there I said it, but whether I did or not does not dictate where I'm headed").

The production from Peace 586 follows suit with Jurny's raps, in that he doesn't make beats that you'll tend to hear in mainstream hip hop. If you're looking for something like Lecrae, Peace will shake you up. His beats are raw and street-worthy. The intro track is pretty slow, but once you jump into "The First 48," it's on. One of the interesting things about One is that each track, except "The Battery" and "Gray Beard," features two different beats. Shortly after Jurny finishes, the beat ends, and then in the same track, Peace brings a different beat that remains instrumental. It's almost like an interlude track after each rap song, but during the same track.

It's hard to listen to One and not wonder why these two haven't collaborated together before now. Jurny and Peace together are a wonderful combination, with rhymes and beats that just naturally go together. It's the kind of album that may take the listener a few listens to fully appreciate. But once it starts to get in you, you can't help but love it. It only has six tracks (though the interludes after each song do make it feel like there's more), but you get a lot out of them. I'd love to hear more from these guys. There's a limited number of physical copies of One available, so get them quick from the Sphere of Hip Hop store. Or pick it up at illect's Bandcamp.