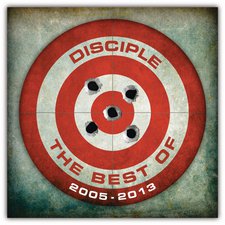 
With almost 150 songs spanning 10 studio albums and one EP, a greatest hits album from Disciple is long overdue. The Best of Disciple (2005 - 2013) is a nine-year snapshot of the band's 20+ years of music making. Listeners will not get a taste of the old school Disciple songs, like "I Just Know" or "God of Elijah," nor will they hear any material from their latest offering, Attack, but fortunately for Fair Trade most of Disciple's commercially successful material was released during these nine years with the label. Even though it's a small window of the legacy that is Disciple, this collection is both a solid introduction for new fans and a tantalizing treat for hardcore fans.

This greatest hits album is equal parts radio-rock and hard rock. "Dear X, You Don't Own Me" and "Invisible" are unsurprising additions here as they are some of the band's most popular radio-rock tunes. "After The World" is one of their best ballads (though "Thousand Things" is king) as it delivers a spine-tingling message of God's steadfast love. "Things Left Unsaid" has never really belonged on any particular album (it was originally found on a limited edition re-release of their self-titled album and repackaged for the deluxe edition of Scars Remain), but it is a welcomed addition to this collection. In the song, vocalist Kevin sits at his grandfather's deathbed wishing he could tell him how much he means to him. Turning the amps up to 11, "Rise Up," "The Wait Is Over," and "Into Black" were the three hits that helped launch the band into the limelight of the Christian music industry back in 2005. A few other adrenaline-pumping anthems are pulled from Scars Remain, including "Regime Change," "Scars Remain" and "Game On," calling us to live out our Christian faith and help equip us for spiritual warfare.

The most valuable additions to this collection are the exclusive fan-picked acoustic tracks. These are fairly straightforward reconstructions; electric guitars are exchanged with beautiful guitar picking, and gritty baselines are replaced with soothing orchestral arrangements. A spectacular version of "Dear X" kicks off the acoustic tracks, breathing new life into the hit single. "Eternity" is beautifully re-imagined, but it would have been even sweeter coming right after "Things Left Unsaid," since it is that song's sequel, written from the perspective of Kevin's grandfather had he been able to respond to Kevin's from his deathbed. Introducing some light percussion, "Dive" translates perfectly to acoustic format, but the real highlight comes with "Lay My Burdens." This final track finds Kevin desperately singing about finding rest for his weary soul. The acoustic guitar solo in the bridge perfectly accents Kevin's vocals, which are just as striking as the original version.

The iTunes Deluxe Edition comes with a "full" concert of their 15+ minute set from Winter Jam 2014. The songs are sinfully short, but the energy these guys bring to the stage is undeniably infectious. The head-banging songs, "Game On" and "Radical," are contrasted beautifully with the intimate "After The World." The smallest details, like the Joey West's double bass and the cool visual effects from the cell phone lights on "After The World," make these memorable videos. In addition to the five song Winter Jam set, there are also three bonus videos from the 2011 Rock & Worship Roadshow. The video for these three songs was recorded in four locations with the audio presumably coming from a concert in California. Their performance of "Invisible" isn't as exciting as the other videos and "Watch It Burn" is way too short with a mere 1:33 running time. "Rise Up," however, is a fun video featuring a back flip from ex-guitarist Micah Sannan and a smashed guitar from ex-guitarist Andrew Welch.

A greatest hits album is a tricky beast. New and casual fans may embrace such collections, but it takes a bit more incentive to get die-hard fans to jump on board. The Best of Disciple (2005 - 2013) does a good job appeasing both with a strong selection of Disciple songs, four stunning acoustic tracks, and eight engaging concert videos.