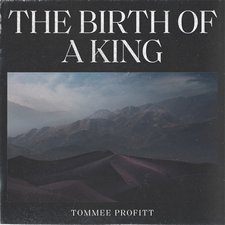 Tommee Profitt
The Birth of a King


Tinkering with Christmas music is always a complex undertaking. The dozens of "favorites" (and monstrosities) are too numerous to include (or exclude), and the disagreement thereof drips with the annually awoken passion of a Black Friday bargain shopper. There are many toes on which to step when it comes to recreating songs which are often associated with listener's most treasured and sentimental memories. Indeed, most of the present-day market is primarily saturated with the classic and irreplaceable recordings of Bing Crosby or Frank Sinatra, newer staples from artists such as Bublé or Carey, and covers by recently-discovered singers with the most incredible voices on the earth (a side-effect of the recent interconnectivity between seven billion people).

Altering these songs is a risky pursuit and a composer's only guarantee is that there will indeed be disappointment by some slighted party. So how does the upcoming symphonic, orchestrated Christmas experience from producer Tommee Profitt fair?

Thankfully, by some minor Christmas miracle, Profitt has managed to smoothly stroll across the edge of a knife when it comes to the release of his latest and perhaps grandest project, The Birth of a King. Fifteen years in the making, this venture features an impressive slew of talented musicians, including Crowder, Rachael Lampa, Tauren Wells, Chris Tomlin, Avril Lavigne, Fleurie, Kari Jobe, and a dozen others. Not since 2003's !Hero: The Rock Opera can I recall so many distinct and diverse artists coming together to work on a unified project. Clocking in at over 71 minutes, a full listen-through of The Birth of a King is a bit of a commitment in today's age of Spotify singles, but embarking on the complete journey is a worthwhile endeavor.

Profitt has done an exceptional job regarding track selection; each of the songs included on The Birth of a King focus on just that: Christ's birth. As such, nearly all primary staples are included; if a faith-based Christmas song is your favorite, it is most likely here (all apologies due to "The Little Drummer Boy"). While Profitt placed a unique spin on many of the album's songs, each rendition still feels reverent and respectful of the original composition. There are some thematic choruses which have been added to a few of the tracks, but in no way do they feel forced or serve to detract from the pieces. In fact, their repetition throughout the album crafts a cohesive and unified atmosphere, an accomplishment seldom witnessed.

Although the number of tracks are too many to discuss in detail, there are several highlights worth exploring. The 17-track album opens with a choir, synth, and organ-supported rendition of with "O Come, O Come, Emmanuel," one of only two songs on the record not featuring a guest artist.

"O Holy Night" consists of a phenomenally powerful duet by Tauren Well and Svrcina, and the mellowly soulful rendition of "O Come All Ye Faithful" by Sarah Reeves is without equal. Crowder's twist on "Go Tell It on the Mountain" boasts a gospel choir to great effect and is liable to land a few spins on radio later this year. Profitt's instrumental take on "God Rest Ye Merry Gentlemen" is one-of-a-kind, and hearing Rachel Lampa's stunning voice on "O Little Town of Bethlehem" echoes with long-forgotten remembrance of a time long passed. The song which most significantly deviates from its original composition is perhaps Nicole Serrano's "Angel's We Have Heard on High," while the most traditional arrangement is Fleurie's "Silent Night." And speaking of Fleurie, her and Chris Tomlin's closing duet "He Is Born" (an original composition) serves as an amazingly lovely and perfectly simple close to a deep and intricate album.

My only critique of the album is extremely mild. For the most part, artists front their own songs and drop off. It would have been a welcome addition to hear more interconnectivity between these musicians across the course of the album (in the form of duets and backing vocals). Additionally, at times, The Birth of a King loses its "Christmas vibe." While not necessarily a net negative, it is possible that the additional inclusion of some deep and heavy bells would have gone a long way. However, this is nitpicking in some desperate attempt to produce constructive criticism where there is little to be offered.

Across seven years of writing for Jesus Freak Hideout, I have awarded only two other albums a perfect five-star rating. While I mentioned that there are a few minor ways in which I would personally tweak the album, it is difficult to objectively argue for how The Birth of a King could be significantly improved. The appearance anytime soon of a large-scale Christmas album of greater quality and significance is a stretch of the imagination. As such, I implore every reader to allow an attentive listen for this magnificent project; you do not want to pass by this one-in-a-decade gem of an album.