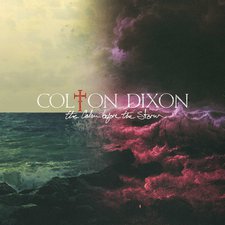 Colton Dixon
The Calm Before The Storm

From his days as a contestant on American Idol to more recently finding his footing in CCM scene, Colton Dixon is a guy you can't help but root for. He displays a tremendous amount of talent and personality when he performs, but with his last two studio albums, his full potential was often muffled by a sleek production and somewhat conventional songwriting. Featuring four acoustically re-imagined cuts from some of the best Anchor and A Messenger had to offer, the Calm EP tears away the shiny pop/rock veneer, allowing for his vocal prowess and hopeful lyrics to become more prominent. Storm is an EP comprised of five remixes which creates a striking contrast to the stripped down tunes. Collectively, these two EP's make up The Calm Before The Storm.

The first three tracks are nice piano ballads, but they aren't as engaging or emotional as intended. The exception to this is "You Are," which feels the most sincere and features a lovely duet with Colton's sister Schyler Dixon. Already a piano-based song, "Through All Of It" is revisited with an acoustic guitar, cultivating a relaxing atmosphere. While each of these four songs are either up to par or superior to their original recording, they are still generally missing the qualities that make a song stand out. Infusing more personally specific or creative lyrics and doing more unique or ambitious musical arrangements (the drum beat of "Limitless" is a good start) would help Colton break free from the formula that is holding him back. The brand new song, "Where I End," rounds out the Calm EP, and while it is an admirable tune about dying to self and finding our identity in Christ, its all-too-familiar musical structure and lyrics stifle its potential.

Storm takes five other songs, all from Anchor, and gives them a fresh spin, courtesy of talented remix gurus such as Neon Father and Tomee Profitt. The Neon Father remix of "Echo" is a highlight, with a cheerful soundscape and flawless transitions over some of Colton's stronger songwriting. Another solid remix is BLZR's take on "Anchor" which has an electronic urban vibe that is more intriguing than the dry power chords of the original. The Pro_Fitt remix of "More of You" has a cool new drumbeat, but otherwise it is a fairly standard remix. "Back To Life" and "Dare To Believe" are upbeat but otherwise unexciting, even jarring at certain points.

The Calm Before The Storm is kind of odd the way it is presented. This project is really two separate EP's, so forcing them together results in a disjointed listen. Ultimately though, this project is a pleasant treat for Colton fans, and worth a spin for just about everyone else.