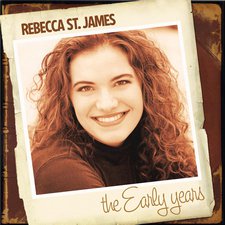 
The way record labels tend to cannabalize the discography of their artists is downright ridiculous. They release albums that have little-to-no meaning, hoping people will buy them, and it's sad to say that in 2006, Christian music veteran Rebecca St. James' record label did just that. With their series, The Early Years, Forefront Records released compilation albums to highlight artists' earlier hits. These releases offer no new songs, no rarities, no new pictures -- no new anything.

The album starts out with 4 singles from Rebecca's self-titled debut. As far as early hits go, "Here I Am," "Side By Side," "Little Bit of Love" and "Above All Things" work perfectly. They were all hit radio singles back in 1994. The songs from her sophomore album, God, are a tad bit more questionable. While "God" and "Go & Sin No More" were both big hits for Rebecca, I don't remember "You Then Me" ever being released to radio?

And it gets even worse. Two of her songs from her third album, Pray, featured here are not hits. Sure, "Pray" was a big hit, but "Hold Me Jesus" and especially "Love to Love You" were not. So now, not only does this project seem rather pointless in theory, but the song selection is pointless as well.

If I were you, and I owned Rebecca's albums, I would just steer clear of this collection. And if you're a newcomer looking into her music, buy her greatest hits album, Wait For Me: The Best from Rebecca St. James. Not only does it include 8 more songs, but all the songs are actually Rebecca's hits! Hopefully, we'll see no more of these aimless albums in the future.