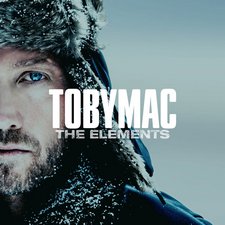 
TobyMac is a prime example of an artist that can stay relevant through a long career in music--he's grown as a vocalist, he changes up his sound for every album (but not too much), and he consistently puts out quality music roughly every three years. His latest studio offering, The Elements, is a collection of 11 no-filler tracks that are focused on Jesus and jam-packed with infectious melodies. Thematically, the elements are a metaphor for the "bad weather" in one's life--pain, suffering, difficult circumstances, etc. Toby recognizes that these difficulties are inevitable in life ("Scars") but calls us to completely rely on God ("I Just Need You," "It's You") and to fight through them together ("The Elements," "See The Light"). The relatively serious theme of the record, the artwork, and the decrease in the amount of bubbly songs, like "Me Without You" or "Backseat Driver," makes The Elements feel like a more mature album for Toby.

While all the usual ingredients for Toby's musical gumbo are in place (hip-hop, pop, soul,horns, and a mix of singing / casual rapping), there is also a healthy dose of variation. This is evident from the first verse of the of the title-track with the style drawing comparisons to NF from Toby's emotionally-charged flow to the minimalist haunting piano notes. Another example is "Horizon (A New Day)," which takes cues from Twenty One Pilots, featuring quick rapping, bleeping synthesizers, and bouncy keys. Any amateur attempting these styles would quickly be dismissed as a knock-off, but Toby takes these influences, uses them sparingly, and makes them his own. In addition to pulling from popular trends, he also dips back into some of his older sounds--the rap/rock title track could be considered a modernized throwback to Momentum and the second verse of "Edge of My Seat" uses an vocal style similar to the chorus of "Diverse City."

One of the best tracks present is "Starts With Me," featuring 19-year-old Gotee Records artist Aaron Cole. Toby and Aaron trade off vocals perfectly over a contemplative electric guitar tone, powerfully singing about ending generational racial discrimination. Toby has occasionally found success in the secular music industry, but "Starts With Me" has the potential to be his biggest mainstream hit yet. Fans will recognize the creative re-use of a lyric from 2010's "City On Our Knees," "we're one choice from together," both compelling us to choose unity and reminding us that, while not explicitly stated in "City on Our Knees," Toby has always stood strong against racism throughout his 30-plus years as a recording artist.

TobyMac has delivered another quality album that lands among his best solo albums, along with Welcome to Diverse City, Portable Sounds, and This Is Not A Test. The catchy hooks, strong bass, and pounding drums make you want to play this music loud, and the emotion and musical variety make you want to listen on repeat. Toby's uncompromising faith in Jesus is a huge encouragement, while his call to action on songs like "Starts With Me" and "The Elements" don't just leave us in a comfortable bubble. Those who have written off TobyMac in the past might find themselves reconsidering their position, and those that have been loyally following his career will find a lot to love with this record.

It's hard to believe that next year will mark 30 years since DC Talk's debut album hit the shelves. Although much has changed in the music world, the man who put the "talk" in that band's name has never ceased giving it his all. TobyMac, for all his playfulness and charisma, is a serious man about his faith and his musical mission, and The Elements may be his most mature effort to date. That's not to say that it's his most tuneful or energetic album, but it might be his most "grown up" one.

Starting off with the epic and atmospheric title track, TobyMac spits out a fierce rap about facing the world outside his door everyday, and lays down a great "thesis statement" for the series of songs that follow. If you trace the "going outside in the elements" idea through the songs, you see an interesting thought-line of the idea. Going outside in harsh conditions necessitates getting the right equipment (first single, "I just need U."), having those conditions affect you sometimes ("Scars") and the reward for braving the elements (seeing the Lord's handiwork everywhere is the bouncy "Everything"). While not every song fits into this thematic framework, there are enough neat tie-ins floating around the album to see that there was great care woven into each song idea.

"Starts With Me" might be one of TobyMac's most introspective moments, and features a heavy groove of distorted vocals from Aaron Cole and weighty lyrics about the tough (and sometimes unfair) things we inherit from our parents and family. The terrific and off-kilter "Hello Future" features another weighty instrumental groove and a neat sing-songy refrain that create an epic, oddball mix of a tune. "Edge Of My Seat," "Horizon (A New Day)" and "It's You" stick close to the familiar TobyMac template of the past few albums, but other than these slight retreads, the album is full of fresh musical ideas.

The Elements may not be as stacked with radio singles as previous albums Eye On It and This Is Not A Test, but it's more cohesive and mature than anything he's done this decade. Thirty years in, and Mr. McKeehan is showing no signs of fatigue. - Review date: 10/10/18, Alex Caldwell of Jesusfreakhideout.com

Hard to believe that after over thirty years in the industry, TobyMac continues to crank out albums full of hit songs. The Elements is more of what he's known for, with crisp production, tight beats, and catchy pop/hip-hop songs. Balancing a good mix of radio ready tunes with concert jams, Toby has another winner on his hands. Favorite songs are "I just need U," "The Elements," "Edge of My Seat," "Starts With Me," and "Overflow." - 10/7/18 Josh Balogh

The Elements, TobyMac's 8th solo album, is a very fun and easy album to appreciate, even on its first listen. Although some of the songs were previously released this year ("I just need U." and "Everything"), it's still full of surprises. The title track, "Scars," "Starts with Me," and "Edge of My Seat" will keep the listeners returning, while the ballads "It's You" and "See the Light" bring the softer side of Toby that we've always loved. Few artists can keep going with release after release after three decades, and even fewer can continue to appeal to the youth after that length of time. Other than being cool, TobyMac has a talent that people can admire such as the music on his latest project. The Elements could be the best TobyMac album next to Portable Sounds. - 10/10/18 Wayne Myatt

Following a string of records that mixed his signature style with various pop and soul trends, The Elements is a promising step towards a more mature direction and a return to the quality of TobyMac's earlier works. The opener and titular track recall the energy and drive of his Momentum days, "Everything" and "I just need U" stamp the record with Toby's now signature soulful grooves, and fans even get a surprising easter egg on "Overflow" (anyone remember the remix of "God's Not a Secret" the Newsboys did with Toby on Shine: The Greatest Hits?). Although it may not be a complete return to form, The Elements is sure to be a gem among fans both old and new. - 10/16/18 Lucas Munachen

With The Elements, TobyMac takes things a bit more seriously than he has before, but still manages to infuse the tracks with the infectious sounds and melodies you'd expect from the veteran hitmaker. If anything, The Elements could be considered Toby's most mature effort to date, using the storms of life and weary roads to create a set of songs that encourage us to press on. Fans should love this record, while those who may have moved on from McKeehan's craft should give The Elements a fighting chance. Standout tracks are "I just need U.," "The Elements," "Scars," and "Horizon (A New Day)." - 12/16/18 John DiBiase