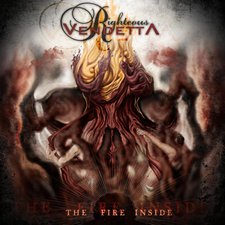 Righteous Vendetta
The Fire Inside

Righteous Vendetta are a metalcore band based out of Powell, Wyoming. Now, before you write them off for being from Wyoming, let it be known that these guys are pretty solid. Putting more emphasis on the "metal" than the "core," Righteous Vendetta are a technical and melodic band more along the lines of Killswitch Engage and As I Lay Dying, with a little bit of the hard rock/nu-metal stylings of P.O.D. and Love & Death thrown in for good measure. They manage to strike a delicate balance between heaviness and melody, and do so pretty proficiently.

Their latest LP, The Fire Inside, contains new mixes of several songs found on the band's Vol. 1 and Lawless EPs, as well as 4 all-new songs. Soaring choruses and catchy sing-a-longs are in abundance on this album, and this is clearly one of Righteous Vendetta's strengths. Vocalist Ryan Hayes has good range, and his convictions are easily sensed through his heartfelt and faith-based lyrics. The rest of the band are no slouches either. Guitarists Justin Olmstead and Carl Heiman are certainly talented, and they really shine on some of the heavier tracks, such as "Fight Back" an "John the Revelator," which were this writer's personal favorites off of the album.

As talented as Righteous Vendetta are, and as solid as The Fire Inside is, it seems a bit too long and drawn out at 14 tracks. The songs tend to blend together, and only a few songs really have an identity of their own. Fans of metal and hard rock will find something to enjoy on this album, but those looking for something with a little more substance might want to look elsewhere.