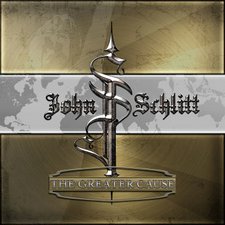 John Schlitt
The Greater Cause

Nine years ago, Petra released what would be their final studio album with John Schlitt as the band's lead vocalist. While Petra has since reunited once again, Schlitt isn't part of that grouping and has continued on his own solo. In 2008, John had released his first solo album in twelve years, titled The Grafting. Thankfully, fans didn't have to wait nearly as long for the rock legend to get back in the saddle as Schlitt has produced a new collection of rock songs known as The Greater Cause.

Petra was one of the pioneers of Christian rock music and while Schlitt's vocal style and musical accompaniment may be dated compared to today's trends, a listen to a few tracks on The Greater Cause proves one essential fact: John's still got it. The opening anthem "Live It Loud" is a blazer, seemingly picking up where Petra left off with Jekyll & Hyde in 2003. In fact, much of The Greater Cause feels like a new Petra venture. Schlitt's first two solo albums (Shake and Unfit For Swine) were created while he was still fronting the iconic band and both projects were substantial detours from Petra (In fact, it was enough for this particular then-young listener to wish the records were more like Petra). But being that The Greater Cause was a fan-funded project, the singer has made no bones about the fact that, from day one, this project would be a rock album for the fans. And as that, the album delivers in spades. As something that fits in with rock music in 2012, that is another argument entirely, however. But with slick production that adds to the power of the music rather than detract, Schlitt almost sounds just as good as ever here, arguably crafting what very well may be his best solo project to date.

Still, you probably have to have been on the journey with Schlitt all these years to fully appreciate The Greater Cause. With the changing of the times and priorities evolving "Christian music" drastically over the years, The Greater Cause is a bit of a snapshot of what "Christian music" was envisioned to be. In a way, it's almost as if Schlitt had borrowed a time machine and recorded The Greater Cause in the late 90s and has delivered it into a time when the mission isn't quite what it used to be, with the goal of rekindling some forgotten passion. Even the album title choice seems to represent this mission.

And just like the rock music of the 'golden years' of CCM, The Greater Cause is undeniably about Christ and the Christian walk without defaulting to being a worship album. Schlitt has assembled an all-star lineup of musicians and producers with Dan Needham at the helm. Needham even provides vocals and a guest rap on "Live It Loud" (although it's more like one of those 'rap for those who don't like rap' spots, rather than a standout guest appearance), as well as drums and keys on most tracks. Then co-writers step in to aid Schlitt, like writers/producers Ian Eskelin and Ed Cash. The mix of talent results in a diverse end product that should appease most fans of the famed singer. "Take Me Home" plays out like a rock radio single while "Love Won't Leave Me Alone" (written by Cash and Needham) is a groovy throwback arena rocker that is tough not to move to. "One Of These Days" is a tamer rock track that disguises an edgier chorus, while "Faith & Freedom" feels like a Petra track with the noticeable fingerprints of Eskelin on it as well. "End Of Fear" is another highlight from the Eskelin/Needham pairing that serves as an anthem for surrender to Christ. "Where I Want To Be" is a token power ballad (although a good one), preceding the standout rocker "Hope That Saves The World" that stretches Schlitt's abilities some in a memorable chorus about Jesus being the answer to the broken world we live in. The album begins to wind down with "Run," a classic rock track, followed by the acoustic ballad "The Gift"--a love song to John's wife Dorla, and closes with "The Cross Remains," a melodic rock ballad with some 80s rock accents (especially noticeable with the guitar riffs).

The Greater Cause is a strong effort from rock legend John Schlitt. Although fans of today's rock need not apply--as the stylistic base for Schlitt's sound is undeniably a classic, arena rock--Schlitt has done well to pay homage to his roots and loyal fanbase while giving it just a hint of modern flavor to remind us where we are in 2012. But Schlitt continues to hold his banner high for Christ and it's a wonderful reminder of what it is about Christian music that captured the ears and hearts of many over the years. At just over 60 years old, the man can still rock!