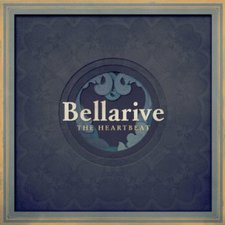 It's hard to blend lyrical poetry and musical experimentation into worship music; it just is. Many who attempt as much tend to lean toward one extreme or the other - accessibility and simplicity, or musicianship and the avant-garde. Although I doubt any conscious attempt was made to ride that line, Bellarive steady themselves atop the intersection of progressive musical tone and expressive verse with poise. Their first full-length collection, The Heartbeat, ignores the line entirely, delivering a raucous collection of tunes that strike balance between sing-able worship and vibrant art.

Since the Orlando-based ensemble released their independent EP, The Being Human Project...Start Listening, in 2009, many have wondered what the creative bunch would accomplish in a follow-up. This being Bellarive's mainstream debut, it's little wonder that the strongest components of their prior outing have been re-orchestrated and incorporated into The Heartbeat's collection. Past favorites "Love Has Found Us," "Shine On," "Sing," and the album-closing "Stories" are all present, re-recorded and in most cases, improved upon. The completely instrumental (and thus ironically-titled) "Sing" is particularly of note for adding a lilting, echoed rendition of The Doxology's melody as it opens. But despite the slight enhancements, the re-used songs remain mostly untouched at their core. Listeners unfamiliar with Bellarive will benefit from the refined versions, even if a third of the songs are familiar to fans.

It is within the new material where The Heartbeat truly shines and also stumbles slightly. Album-opener "Heartbeat," in addition to the first released single "Taste of Eternity," integrate great energy and catchy reprises, full of rowdy gang vocals and intricately layered walls of sound that swell and pound appropriately. "Hope is Calling" makes good use of its pulsing beat structure - very effectively used in tandem with the triumphant lyrical theme - while the soft piano and string arrangement of "I Know You" flawlessly frame the reflective melody and harmonious vocalization. Musically, Bellarive exemplifies the concept of serving the song. Each track is obviously composed to fit its particular tone, with no single instrument, voice, harmony or crowd chant seeming out of place. The songwriting is poetic and worshipful, and the music compliments the lyrical hue while still delving into the pursuit of new artistic directions.

That experimental tendency finds itself mitigated on "The Father's Heart," a song that feels slightly out of place on the album. Musically, it's the 'safest' and most genre-fitting tune, complete with 'whoa-oh-oh's. It's not a bad song, but when one considers the knack Bellarive exhibits elsewhere in pushing worship music out of its comfortable structures, it just feels too tame. The disparity is evident as soon as the next song begins. "Here We Are" changes tone, melody, and lyrical direction at least three times without ever losing the listener in chaos or confusion at the shifting of its character. Even "Measures of Rest," with its toe-dipping into the realm of digital beat overlays and more electronic elements, never overpowers with the artistry to the point of losing the audience. Bellarive is at their best when they run away from established paradigms, so much so that the tiniest of conformity to the norm becomes an incredibly obvious blemish, simply because the surrounding work is so much more.

Another welcome departure from the norm has to be the powerful "Tendons (The Release)." A subdued and minimalist first half orchestrates the struggle of man to dislodge himself from the lingering hindrances of his sin nature. But then bassist Josh Luker takes the mic - delivering an emotional spoken-word piece of prose. Luker's voice cracks and strikes high and low as he delivers his portion - more reminiscent of Dan Smith (of Listener fame) than Aaron Weiss (mewithoutYou). The speech sweeps between subjects, from the desperation of human wretchedness found in Romans 7, to the prodigal, and back again to the theme of wrestling the 'old man' of our past nature. "Oh my God, I've been sleeping with a corpse! / Oh, and these bedsores - they still rest in my bones / Oh how I've made a beautiful dance of this cadaver / But my audience is appalled" It's a gently jarring transition, leading back into a triumphant chorus reprise. The choice to put something so personal and artistic on an album that is unabashedly worship is risky, but a risk that pays off in impact and poignancy.

The progressive nature of Bellarive's music has garnered comparisons to David Crowder*Band or Rend Collective, but honestly, they have a charm all their own. Emotive and melodious, enthusiastic and imaginative, The Hearbeat is a slow-burn masterpiece of musicianship rooted in a genuine longing to commune with our Creator.

After Come&Live! released The Being Human Project...Start Listening from Bellarive, which showed potential for a bright future, the group soon found themselves with an opportunity to further their mission, which came in the form of a partnership and record contract with Sparrow Records. Their first release with Sparrow is the band's debut full-length album, The Heartbeat. All the things that made Bellarive's EP a great listen have carried over (and have been improved upon) for The Heartbeat. Terrific hooks, appealing vocals (with ample use of harmonies when necessary) and solid pop rock in the vein of Coldplay, U2, Jars of Clay and the like. The Heartbeat features four songs from Being Human, re-recorded (and, with the exception of the instrumental "Sing," they're shortened, sometimes by a full minute), with eight brand new songs that won't alienate those who happened upon their debut. If anything, it's even a little more accessible, as noted in the song "Taste of Eternity," which features an almost audience-like chanting of the chorus near the end, and singable lyrics that will make you want to join in. Adversely, "Tendons (The Release)" is a lot less accessible, with an entire portion of passionate spoken word behind some delicate indie music (it little reminiscent of mewithoutYou - although Josh's voice does get a little squeaky, and thus a little irritating, a few times). The song as a whole is more indie than what we've gotten so far from The Heartbeat, and despite the irritating part, it actually ends up being one of my favorite songs of the record. Whether you were familiar with the band in their C&L! days or not, if you're a fan of pop rock or indie music, The Heartbeat is a worthwhile investment. It won't be free like The Being Human Project still is, but if you lay down the dough for it, you probably won't regret doing so. - Scott Fryberger, 6/14/12