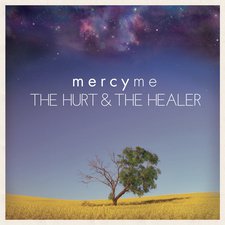 MercyMe
The Hurt and The Healer

If there is a general market comparison to MercyMe, it might be the band Train. Both bands emerged around the same time in the late 90's and made an immediate impact with well-written songs that spoke for themselves. Both bands likewise put limited emphasis on "image" and have put out consistently solid (but not always great) records over the last decade. And every once and a while both bands bubble up to the surface again, not with gimmicks but with a good song or two.

The Hurt & the Healer is full of those pretty good songs, and beyond being a "good MercyMe song," a few numbers reveal a bit of a growth spurt. First single "Don't Give Up On Me" flirts with some Mutemath style kinetic, hyper-active drumming and processed vocals, and the soulful "Take The Time" finds lead singer Bart Millard dueting with Needtobreathe's Bear Rinehart over a gritty bed of slide guitars. The honest "southernness" of "Take The Time" is a great showcase for Millard's Texas twang, and hopefully inspires MercyMe to embrace their southern roots a bit more and not coat everything with an Adult Contemporary gloss. Both songs (and a few more, like the honestly funky "You Don't Care At All") show signs of life and indicate that the band is making headway.

"You Are I Am" is a worshipful, lyrical highlight; "I've been the one / held down in chains / beneath the weight of all my shame / I've been the one to believe / that where I am / You cannot reach." But later the songwriter wisely remembers grace, stating "It's not about falling / but where I land." This song has great promise, particularly in a live setting.

A few songs could have used a few more hours to marinate. The three closing tracks, "Hold On", "Best Of Me" and "The First Time," fall into the "paint by numbers" category and are, compared to the interesting and varied songs that come before them, a little boring. This has the unfortunate affect of blunting the pace of the album at the end.

Firmly in their second decade as a band, MercyMe is in dire need of breaking out of the Adult Contemporary mold, and The Hurt & the Healer shows signs that they might be on their way, however slowly, to a more diverse and creative future as an artist.