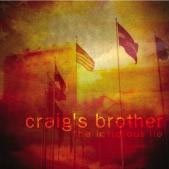 Tooth & Nail Records has had many bands come and go over their almost-twenty-year history. Some are fondly remembered, like The Juliana Theory and P.O.D. (yes, they had a short stint on Tooth & Nail). However, some almost seem to never get mentioned. It's sad, because there have been some really good bands that we never hear about today, like Outer Circle, Too Bad Eugene and one who is making their comeback in 2011, Craig's Brother. Now in the independent circuit, Craig's Brother is back from hiatus with a brand new full-length album called The Insidious Lie, and they're picking up right where they left off with some fun, energetic and raucous pop punk.

As a fivepiece band during their time with T&N, Craig's Brother has since lost two of their guys and added only one replacement. Ted Bond still takes the role of lead vocalist and guitarist with Heath Konkel and Scott Hrapoff taking drums and bass, respectively. Adam Nigh and Andy Snyder have left, but the band has added Glade Wilson as the lead guitarist. Wilson makes for a nice addition, giving some songs a much rockier feel with his guitar licks, such as in the tracks "Insidious Lie" and [possible album highlight] "The Problem of Evil." The former features 80s metal-esque guitar work throughout the song.

There's a lot about The Insidious Lie that brings to mind the old days of Craig's Brother. Not necessarily soundalikes, just the overall style they always presented (though, due to their straightforward take on pop punk, there isn't a ton of originality here). The album's opening track, "Freedom," starts things off with a bang, with some fast-paced music and high power vocals (for the record, the drums in this song may just shine the most out of the song's aspects). Other tracks like "Insidious Lie" and "Fallen" feature some speedy drums that pound their way through to the song's end. Their music shows that the pop punk of the days of old is still alive and well, and can be properly pulled off. They also have some slower stuff, with a tamer pop punk sound in "Klamath Falls" and "Party Girl." (A little disclaimer for "Klamath Falls": Bond talks about his rough past in the music industry. He talks about being in a band with "a bunch of drunks I can't stand," being "halfway to Hell" and also mentions getting "angry letters breaking my balls." It's mainly that last one that warrants a disclaimer, due to the fact that some may be offended by the comment)

The band really seems to have not lost a step at all. They sound just as good as they did during their T&N days. Fans who enjoyed previous albums like Homecoming and Lost At Sea wouldn't find themselves disappointed by The Insidious Lie. They're giving away "The Aaronic Blessing (Peace on Earth)" for free, so you can give it a go without losing anything. But if you've followed the band since back in the day, you can get this album without worrying about whether or not you'd like it... because you will.