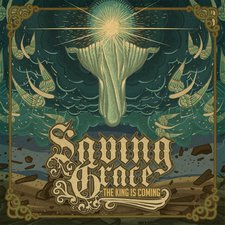 Saving Grace
The King Is Coming

New Zealand has quietly become a breeding ground for some great metalcore, the likes of which include heavy hitters Saving Grace. Their most recent offering, The King is Coming, is truly a sight to behold within a crowded genre of indistinct bands, and that's saying something significant, especially on a label like Facedown. Whereas the typical Facedown offering nowadays combines revivalist hardcore with sludgy, incessant slow chugging (usually with the "Facedown bend" I've heard in at least three separate albums released on the label by three different bands; it sounds like a guitar trying to do a bass drop), Saving Grace plays metalcore like they invented it. Not since August Burns Red's Thrill Seeker have I heard a more aggressive, in-your-face record.
In my opinion, Saving Grace is exactly what Facedown needs right now. This band is passionate, unrelenting, and just straight-up mean, almost refusing to slow down even in their breakdowns (which are appropriately placed and flow with the mood of the songs, I might add). Every bit of intensity in Unbreakable and Behind Enemy Lines is present here, and then some; if you'll excuse the sophomoric cliché, The King is Coming is the Saving Grace you know and love, on serious steroids. As always, Nick Tautuhi's growl is guttural and distinctive, and his lyrics are not only well-written (and avoid dipping into the Velveeta) but flow well with the music, two things that are hard to make work together. The guitars of Vasely Sapunov and George White still have their distinctive Saving Grace tone while cranking up the speed and intensity, and the rhythm section's absolute refusal to get bogged down in "br00tal" deathcore-ish muck is refreshing, to say the least. Saving Grace doesn't toy with its captives; it burns the town to the ground and takes no prisoners.
Upon first listen, I was pleased to discover that someone still knows how to do intro/outro tracks right. "The King is Coming" greets the listener with what sounds like a broadcast from the depths of Hell, followed by a For Today-inspired breakdown proclaiming the imminent arrival of the King; the punch each chug packs is what really brought Thrill Seeker to mind. "Shekinah" kicks the door down in a manner similar to SG's signature tune "Unbreakable," but with more force and firepower, a trend that continues through the next three songs until we hit "Man of Sorrows (The Funeral Dirge)." Sonically, it feels like the machine gun ran out of ammo, so they picked up a battleaxe and started chopping away; it's heavy as usual, but the song is one long, slow breakdown. Come on, guys.
"Man of Sorrows" slowed the ride down, but "The Eye of the Storm part III" brings it to a complete halt. While it is a continuation of their prior two similarly titled instrumentals (and its title actually makes sense given its placement), it does less than wonders for the pace of the record; as in exercise, breathers are necessary, but should be kept to a minimum until the end of your workout in order to stay loose and keep your heart rate going. Speaking of getting your heart rate going, "Habakkuk" does just that with its untempered aggression, making it one of the two standout tracks on the album along with the following cut, "Kefirah," which has a message as intense as its pummeling delivery. You can't get much more bold than "Universalism is a lie!" "Beware the Apostates" and "Revelation 6" keep the fury going steadily until "With Lifted Eyes" hits the ears; while most outro tracks nowadays are pretty much disposable, "With Lifted Eyes" seems to call to mind "Man In Cage Jack Wilson" from Zao's Liberate Te Ex Inferis. Like the first and last tracks on that classic record, "The King is Coming" and "With Lifted Eyes" bookend The King is Coming wonderfully and refreshingly.
I first heard "Unbreakable" on a Facedown sampler a year or so ago. From then on, I knew Saving Grace would be a band to watch out for. Now, with The King Is Coming, they have firmly established themselves among Facedown's best and show nothing but promise; forgive the wordplay, but this blistering, Spirit-filled band may just be their label's Saving Grace. Definitely get your hands on this one.
- Review date: 11/23/11, written by Steven Powless of Jesusfreakhideout.com