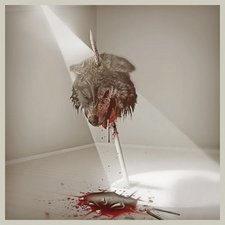 A Plea For Purging
The Marriage Of Heaven And Hell

Last year, A Plea for Purging released their Facedown Records debut, Depravity. The album was both unique and lackluster at the same time. It had a few great moments where the band showed off a nice down-and-dirty metal approach, but it also suffered from a general lack of energy or variation. Now, Plea returns with The Marriage of Heaven and Hell, an album that effectively pushes them into a more mature and complete sound.

The Marriage of Heaven and Hell deals for the most part with the familiar "wolf in sheep's clothing" scenario. There's a lot of anger in this album directed at church leaders who lead only for the sake of personal gain. This point is emphasized by the occasional soundbite of such a teacher preaching the prosperity gospel. Musically, the album is low, slow, and very dirty. In most tracks, the band lays down a simple, dissonant riff, then builds upon it with a myriad of breakdowns, choppy drum sections, and the incessant throaty growls of lead vocalist Andy Atkins.

Where The Marriage... improves upon Depravity is in the energy of the tracks. The songs on Depravity tended to get bogged down in the slower sections, with the guitars stuck in an uninteresting pattern for seemingly minutes on end. On The Marriage..., the songwriting is kicked up a notch, providing a consistent variety of riffs and rhythms within each track. At the same time, the song structure is more chaotic and dissonant, which is exactly where this band should be musically. An excellent example of this stop-and-start, clashing sound is the track "Golden Barriers."

There is one new development on The Marriage... that may come as a surprise to some listeners: the addition of clean vocals. There's not a hint of singing until the fifth track, "The Fall," suddenly breaks into a very clean and very melodic chorus. The contrast between verse and chorus couldn't be stronger, and in a way, that's what enables the band to pull it off. Instead of cheapening the sound, the singing emphasizes the guttural heaviness of the rest of the track. After "The Fall," the clean vocals pop up several more times. In fact, the second to last song, "The Jealous Wings," is entirely clean.

The Marriage of Heaven and Hell is both more polished and more chaotic than anything we've heard from A Plea for Purging before. It's a clear step forward, as the band taps into the full potential of their unique sound. While there are still the occasional low points, this album showcases the best A Plea for Purging has to offer, and some of the best metal we've heard this year from any band.