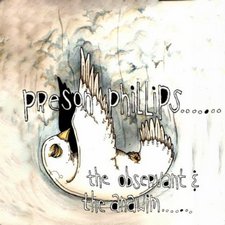 Preson Phillips
The Observant & the Anawim

We live in a music era where artists are more willing to give away their music for free. Of course, there are still copyright laws that forbid copying or downloading an artist's music, but artists have different ways they can offer their music to listeners at no charge without breaking any laws. NoiseTrade.com is one way they go about it, while others just put download links on their website. Some of the more recent artists to take the latter approach are Fono, Lovelite and new indie worship leader Preson Phillips (and just to clear up any confusion, yes, it's "Preson," and not "Preston"). His newest collection of worship songs, a short album entitled The Observant & The Anawim, costs however much you want to pay for it, or if you can't afford to pay anything, don't sweat it, because he's gonna let you download it anyway.

The first thing you may notice about Phillips is that his voice bears an uncanny resemblance to Five Iron Frenzy vocalist Reese Roper. It's not similar enough to conjure up any rumors about Roper and Phillips actually being the same person, but it's close. However, some other familiar names are credited as having appearances on the album. Underoath guitarist Tim McTague contributes guitar work on "What Am I?" and then he's joined by Underoath's drummer, Aaron Gillespie, on "Then They Will Know," where they both provide some background vocals. Needless to say, a worship band that's actually endorsed by Underoath is probably one that should at least be given a chance.

"The Lord's Prayer" starts things off, opening with a beautifully-played acoustic guitar, and Phillips' vocals praising God's goodness. The guitar shifts into strumming, and some light drums come in, giving it a slight folky sound. "Hallowed Be Thy Name" is next, shifting to a sound that could almost fit into the '90s alternative genre. Tim McTague makes his first appearance of the album, playing some guitar in "What Am I?" Continuing the sound of the previous song, Phillips sings of our nothingness in comparison to God's greatness. His voice is noticeably weak at times in this song, but altogether it's not bad, and it works well for the style of the song. An intriguing guitar line starts up "I'll Sing of Your Love in the Morning," shortly followed by the words "All You've created is good," immediately recognizing our Creator's perfection. It's a mostly-quiet song - with the acoustic guitar being the only instrument used - but the guitar and vocals do get a bit louder for a small portion near the end. "Redemption Song" features some outstanding guitar work (not even as a guitar solo, just the guitar that's played throughout the song) with a mid-tempo drum beat, and Phillips thanking God for His song of redemption and forgiveness to us. "Then They Will Know" is a more upbeat tune, asking God for healing and change so that we can use it to show the rest of the world what He's done for us ("Then they will know we are forgiven, then they will know that we are loved, God"). McTague and Gillespie come in after the chorus with some well-placed and -executed "da da da"'s accompanied by some clapping. Things slow down again for "Until God's Realm Comes," which I want to say reminds me of some slower Poor Old Lu. Phillips then seeks humility in "Hold Me Down," and simply praises the Lord in the toned down album closer "Hallelujah."

The Observant & The Anawim is a prime example of a great worship album. We definitely need more of this soon. It's a little disappointing that there's only nine songs, but at the same time, it's free, so are we really allowed to complain about that? And even so, in the nine tracks that we are blessed with, we get a lot: Some amazing musicianship with passionate lyrics without having to stick to any sort of musical formula. Preson Phillips and his band have a great album on their hands, and I have a feeling it will only get better from here.