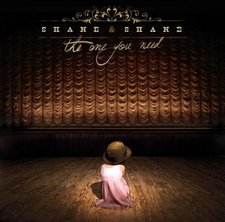 Shane & Shane
The One You Need

Shane and Shane, the little "duo-coffee-house-college-worship-band" that could, returns to the music scene with a smooth, yet soulful and heartfelt ninth major label release, The One You Need.

The opening track "Liberty" kicks things off with a down home barn burner of a number that mixes dobros, banjos, gospel organ and hand claps with a stomping beat and soulful melody. This is an excellent choice for an opening salvo, and the energy of the track extends further down the song list to the organic funk of "Future Version" and the soulful southern fried "Because He's God." These songs should make for a fantastic concert experience.

The first single and title track, "The One You Need," is an album highlight. This prayerful tune expresses well the feeling of parents who want to "be the everything" for their children and for them to walk in the right direction in life, yet realize that as fallen people they are limited and that ultimately "Jesus is the one you need." The ability to take a universal feeling experienced by so many and put a creative twist on it speaks highly to Shane and Shane's creative ability. And their heart for their audience, who has no doubt grown along with them since their college days and now have kids of their own, shows their connection to their fans.

If there was one negative to this album, it would be that at times the production veers from loose and organic to slightly over-polished and slick, sometimes within the course of one song. Add to this a little "American Idol style" over-emoting in the vocals and you have a product that will perhaps do well on the radio, but somewhat blunts the overall sonic experience and long term listening prospects of the album.

It's interesting that on the Shane and Shane website there are "acoustic re-mixes" of several prominent songs available for fans to listen to. This suggests that the band senses right out of the gate that these songs were given a bit too much spit-shine, and are better served in a more raw form. Having said that, The One You Need is a fine and sincere effort by a band who knows their audience well.