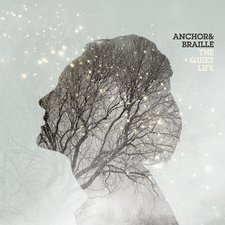 Side projects such as FM Static, The Almost, The Brothers Martin, The Drawing Room, Neon Horse, and many more in between have all had their day in Tooth & Nail Records' proverbial sun with varying degrees of longevity. But the one thing they all share is having ties to other successful artists on T&N's docket. No doubt one of the most popular and practiced bands in T&N's history, Anberlin amicably parted ways with the label in late 2007, but with an impressive tenure comes lasting future providence. Anberlin's vocalist Stephen Christian began the project Anchor & Braille years ago, but for his second album, T&N gladly took him on their roster, but The Quiet Life proves its worth well beyond its marketability.

The central theme of The Quiet Life is living vibrantly in the moment. Unlike the bleak, sometimes bittersweet, musings of 2009's Felt, this go-round feels far more hopeful and optimistic without opting for unrealistic naivety. Even when it's not in sight, joy is the destination. Look no further for a sanguine outlook yearning for something more with lines such as "Life is beautiful, open your eyes/it's not somewhere out there, it's there by your side/it's here and today, it's there in your smile" ("Knew Then Know Now") and "Is it just me or is life passing us by?/We breathe and we eat then we sleep then we drink and we die/If not now then, if not now when?" ("If Not Now When"). But even outside more positive themes, the musical landscape this time is more upbeat and makes better use of interesting percussion techniques (akin to Felt's "Like Steps in a Dance"); the lead single "Goes Without Saying" is ushered in with an electronic timed drum beat, and other tracks such as "In With the New" and "Kodachrome" follow this level of buoyant composition, and it adds more layers to A&B's alternative-painted texture. But just in case listeners get concerned with low supply of ballads on The Quiet Life, A&B sticks "Hymn For Her," "Everybody Here Wants You," and "Before I Start Dreaming" at the album's end, and they prove to be a trio worth savoring.

The mere extra drums featured around The Quiet Life could be deceptive, but the Anchor & Braille that listeners know from Felt hasn't completely vanished, but has only evolved. Christian takes every opportunity to showcase his falsetto abilities when they shine best, and the trademark stripped-down approach in its many dimensions hasn't gone anywhere. If anything, the production value has improved, but at the same time, the approach is still attractively rough around the edges; it's a refined, but not too refined, effort of almost purely acoustic instrumentation. Another improvement comes with the more purposeful setlist construction. While Felt was surprisingly strong for an album of songs written over a long period of time, The Quiet Life features a better organized tracklisting with songs all written with the end product in mind, and the album is only greater for it.

Based solely on Anchor & Braille's track record, Tooth & Nail's signing of Stephen Christian's project makes absolute sense; the fanbase is there and ready, and A&B's sound fits in with the roster with uniqueness only to its benefit. While Felt was undoubtedly a labor of love spanning several years with plenty of gems along its course, Christian has pieced together his strongest and most cohesive solo work yet with The Quiet Life, an ode to a purposeful existence and an accomplished musical philosophy to match. With Anberlin's next full-length record still to come later this year, Anchor & Braille's The Quiet Life serves in the meantime as one of finest singer-songwriter efforts this year, one in which Tooth & Nail should take pride and joy.