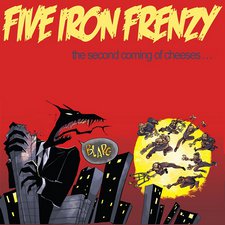 
After exploding back onto the music scene with Engine of a Million Plots, Five Iron Frenzy quietly released a digital exclusive album of joke songs and tracks recorded from their Kickstarter rewards entitled The Second Coming of Cheeses.

Like the title suggests, this is basically a sequel to the 2003 B-sides and rarities compilation Cheeses of Nazareth. Both are about random topics and filled with short, nonsensical songs. Where they differ is their cohesiveness. Cheeses of Nazareth varied wildly in sound quality from track to track, jarringly bouncing between B-sides, live tracks, joke songs, and demos, but The Second Coming of Cheeses is more unified in quality and purpose (or lack thereof). But don't be mistaken that any of these songs sound anything alike. The styles shift dramatically from reggae to gothabilly to ska with little notice, but all of these songs fit together. In this sense, it is reminiscent of the rock operas on Quantity is Job 1, but without poking fun at the genre and only one mention of pants.

"Three Frenz!" opens the 18-track album as the shortest song present at 38 seconds. It uses a sample from the royalty-free music service iMovies to create a funny song about three people named Johnny, Steven, and Uncle Carl being best friends. Other songs under the one minute mark include the fast and furious pop-punk "So Much Fun!" and the gangsta rap song "My Apartment Is Made out of Ham!" The latter says a bunch of random nonsense--including a line from Aretha Franklin's "I Will Survive"--before lead singer Reese Roper suddenly becomes distracted by the fact that his apartment is made of ham. Though these songs are played for laughs, they are all fairly thought-out and say more than just "pootermobile" and "donkey basketball." Not all of these short songs are a success though; "I Can't Stop Schlopping" and "El Pollo" both add little to the album.

There is a lot of personality in these songs, with each track being as random as the one before it. The accordion folk song "To Astoria!" takes us out to sea on a treasure hunt, and on the very next song, we are in Reese's his home as he is relishing a Saturday morning by drinking coffee and lighting trash on fire. "Happy Birthday!" is strangely dark and danceable while "Insulin!" is a comical and somewhat educational song about insulin. This song will quickly have you rapping along with Reese about fatty acids and triglycerides and even features a synth that sounds like it came right off an old horror movie.

Reese is featured on just under half of the tracks here, giving the rest of the band a chance to take the spotlight vocally. Scott Kerr comically explains in "Bacon!" that "potatoes, eggs, and salad are dull to say the least / but add a little bacon and you have quite the feast." He enjoys bacon so much that he even wants to marry it. "Robots Are Fun!" is a first-person story sung by Micah Ortega about a boy camping with his tree-chopping robot. This ridiculous song takes a mellow acoustic-driven approach in the verses and is contrasted with a frenzied electronic chorus. Similarly chaotic, "I Will Destroy!" starts as a pleasant song about jumping on trampolines but quickly becomes a heavy metal song about dominating at Ultimate Frisbee, board games, and anything else that takes skill.

Five Iron Frenzy is a band that people love or hate. Because of the nonsensical nature of this album, it is more polarizing than their other releases, but it's clear this was designed for fans who already love the band anyway. With this fun release, and Between Pavement and Stars EP being promised this November, this is an exciting time for FIF and proof that this reunion isn't a "one and done" kind of deal.