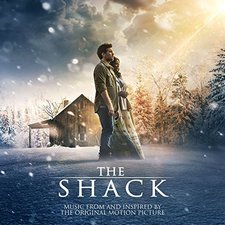 
The movie soundtrack is a curious beast. Its role as an accompaniment to its parent film gives it a dual nature. It must reflect the tone and themes of the movie, while attempting to create a feeling and "story" as a stand-alone work. Some soundtracks throw a variety of different genres into the mix, with each echoing the subject and overall theme of the movie. Others try to recreate a time and place by staying in a particular genre and period of music. And in the days before Spotify playlists, they served as a mixtape for a certain feeling or moment in time.

The Shack: Music From And Inspired By The Film leans towards the "theme" model of soundtracks, with numerous genres of pop music all echoing the central themes in the movie (grace and comfort in hard times, searching in the midst of tragedy). With a number of Country Music's royalty sitting next to some of the biggest names in Christian Music, the soundtrack offers a wide array of sounds, and depending on your views of a particular genre, the listener will either find something to like, or want to give the whole project a pass. The Country Music quotient is high here, but almost every song in that genre works in the context of the film. There are good-to-great moments sprinkled throughout the album, and as with any soundtrack, they will connect or miss the mark depending mostly on your view of the film. The soundtrack, after all, is not meant to be a completely stand-alone work, though many do succeed that way.

The best way to review an album like this is to break it up by genre, and for the Country side of the album, there are both hits and misses present. The opening song, "When I Pray For You" by duo Dan + Shay succeeds as a sentimental and sweet song about wondering what being a parent will be like. Country Music power couple Tim McGraw and Faith Hill turn in an inspirational tune about faith in the midst of tragedy and chaos, "Keep Your Eyes On Me" (the song soundtracked the film's trailer), and the well-written song serves as a thesis statement of sorts for the book and film. Lady Antebellum's "Lay Our Flowers Down" offers a mournful song for a loved one's passing, while Dierks Bentley's "Days Of Dark" provides a rousing (almost Celtic) prayer for hard times to pass. On the other side of the Country coin, the cloying and hokey "Phone Call To God" and "Honest To God" don't rise above filler, though both are well-intentioned.

The pop and CCM sides of the aisle also run the gamut of success here. Kelly Clarkson and Aloe Blacc's "Love Goes On" serves as a needed downbeat gospel number that features the two pop singers' voices quite nicely. The following "River Of Jordan," that features gospel singer Breyan Isaac with rapper Lecrae, also brings the mood to an appropriate moment of reflection. The teaming of Needtobreathe and Lauren Daigle on "Hard Love" takes an already great song (my favorite from Needtobreathe's last album) and takes it to another level. Daigle's voice meshes well with the Rinehart brothers, and the tune's theme of perseverance in trial works well within the framework of the story's subject matter. Skillet's acoustic version of "Stars" is also a winner, and serves as a needed bit of climactic worship at the end of the album. Unfortunately, both We Are Messengers' "I'll Think Of You" and for King & Country's version of "Amazing Grace" underwhelm a bit. Both songs are understated musically, and could have benefited from a bit more energy in their delivery. Both artists have recently delivered great albums, so these two ending songs were a disappointment.

The Shack, with its heavy themes of confusion and tragedy in the light of God's grace, and interesting narrative arc of an extended conversation with the Holy Trinity, is a landmark story for many who have suffered a loss, and as a supporting work, the film's soundtrack serves that theme capably.