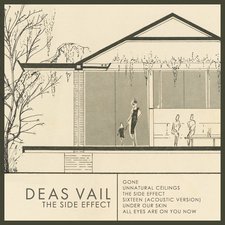 Deas Vail
The Side Effect EP

I've been a fan of Deas Vail since I heard the opening notes of "Rewind" off of their album All the House Look the Same. Since then, they have developed musically and lyrically while still sticking to a same general formula, and excelling at it. Their latest offering The Side Effect EP is no exception to that habit, which is both a positive and negative happening.

The EP opens with "Gone," a song that lacks in the verse but excels greatly in the chorus. Allowing itself to hang on Wes Blaylock's flawless vocals, the chorus almost bounces along, giving it a slightly more joyful, upbeat feel than may normally be associated with the act. The track following, "Unnatural Ceilings" is a more guitar-driven track, and has an almost heavy feel but still overflows with Deas Vail gentility. The title track is where the band really hits a homerun. To me, the quality of this one song made the entire purchase worthwhile. It has a gorgeous, dark feel to it, established from the opening chords and continued through the subdued vocals and ethereal chorus. Following is an acoustic version of the love song "Sixteen" off of their self-album. The band hits an unfortunate hiccup here in that the song was better left alone. Something gets lost in the translation; the track would've been fine as an original but as a stripped-down acoustic version it falls short.

The music gets back on track with "Under Our Skin," an intricate work that features prominent strings, a driving drum beat, and the best vocal work on this collection, as it serves to highlight Blaylock's range. The Side Effect EP comes to a strong finish with "All Eyes Are On You Now," which utilizes a mix of a gentle verse and powerful chorus, in true Deas Vail fashion.

Those looking for a departure from the norm in this EP will be disappointed, but Deas Vail triumphs in their field, and they solidify their place with this EP. It's worth the money spent, even though the "Sixteen" revamp can be skipped. If nothing else, check out the title track; you won't be disappointed.