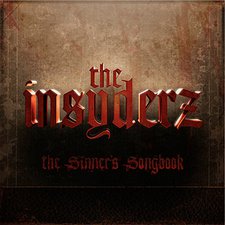 The Insyderz
The Sinner's Songbook

Ska-core band, The Insyderz hasn't released an album in nine years, but thanks to Kickstarter, the band has finally returned with their sixth studio record, The Sinner's Songbook. The Insyderz are the first of the "big three" ska bands in the Christian scene (The O.C. Supertones and Five Iron Frenzy would be the other two) to release a comeback album after a successful Kickstarter campaign. The group returns behind Joe Yerke's signature raspy vocals with crunchy guitars and blaring horns.

The album starts with what sounds like a dark song in "Angel of Death." More than anything, the message is a reminder to be prepared for eternity at all times; you never know when your time will come. Skipping ahead two songs to the title track will land you on the most exciting part of the album. "The Sinner's Songbook" starts with Joe's vocals, but gives way to Reese Roper of Five Iron in the third verse and subsequent choruses. If Reese isn't enough for you, the bridge features Supertones' Matt "Mojo" Morginsky laying down a hip-hop vocal section typical of the vocalist.

The record also features plenty of expected material from The Insyderz such as "Send the Fire!" (Featuring a Ramones "Hey-ho let's go" throughout), "We Come in Peace," "Like Drawing Blood From a Baby" and "Patron Saints of the Underdogs." On the flip side though, the guys bring some slower, and more unexpected, material such as the moving "The Dirty Work," the short "Tension Prayer" interlude, and the Irish folk inspired "The Snake." Joe and company also add two covers to the mix with Jackie DeShannon's often covered "Put a Little Love in Your Heart" and 80's Catholic pop band Sonseed's "Jesus is a Friend of Mine." Both covers turn out to be fun and catchy, but the biggest misstep on the album has to be with the "dance" song "The Insyderz Shuffle." The track falls flat and begs to be skipped after a single listen. It's pretty doubtful you'll want this song played at your wedding reception or next party.

While it's great to have The Insyderz back, the long awaited new album, The Sinner's Songbook, doesn't have quite the power that Fight of My Life (1998) had, yet it does outperform Soundtrack to Revolution (2003). There are enough songs for both Insyderz and ska fans to enjoy, but I have a sneaking suspicion that The Sinner's Songbook will be the weakest of the "big three's" return albums. Go pick up The Insyderz latest and skank until your heart is content; just don't expect to be blown away with the record as a whole.

Nine years after their last album, The Insyderz are joining the 2012 ska revolution with their new independent album, The Sinner's Songbook. The Insyderz have become known for their grittier, rockier sound (generally referred to as "skacore") and The Sinner's Songbook is classic Insyderz, with Joe Yerke's signature, raspy vocals and the band's punk rock rhythms. The album starts off pretty strongly, with a cover of Hank Williams, Sr.'s "Angel of Death" and a fun new song called "The Nevermind Kids" that features some light rapping reminiscent of an older Insyderz song called "The Hunted." The title track is one of the better songs as well; Joe Yerke reminds the followers of Jesus that we aren't any better than those who don't follow Him. Reese Roper from Five Iron Frenzy joins in for the second verse, with Mojo from The O.C. Supertones taking the rap bridge. The rest of The Sinner's Songbook is a mix of new songs, cover songs and one hymn. The highlights of the Insyderz originals are "Sinner's Songbook," "Our Darkest Hour," and the ska gem "We Come In Peace." Yerke lays out the band's intentions in "We Come In Peace," while they revisit their Skalleluia style with "All Creatures," and the Celtic sounds of the fun-to-sing-along-with "The Snake." The other two covers besides "Angel of Death" (which features Matt Baird of Spoken, who does some oddly appropriate screaming in the bridge), come later in the track list. Made famous by Jackie DeShannon, "Put A Little Love In Your Heart" is given the Insyderz treatment, but it turns out to be one of the album's weakest moments. The third cover is a lot more fun and well-done. "Jesus Is A Friend of Mine" is a cheesy song ripe for the ska band covering; originally by Sonseed, their video was made into a meme that got passed around the internet a couple of years ago. Speaking of cheesy, while it's strictly made to remind rude boys and rude girls how to properly dance to ska, I could've done without the "Insyderz Shuffle." The Insyderz were never one of the best ska bands, but they know how to have a good time playing a fun style of music, and they're not afraid to share their faith with it. The Sinner's Songbook isn't their strongest effort to date, but it's a good listen. - Scott Fryberger, 11/15/12