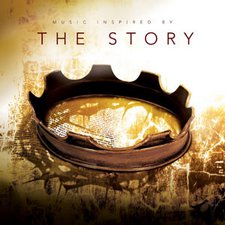 When seen from a specific perspective, God's Word can seem like a flurry of haphazard tales. However, those born again know that these plots all intertwine, giving cohesion to the Bible's readers. Randy Frazee and Max Lucado recognize this fact, beginning The Story campaign. Churches nationwide who are participating in this current series are going through nearly the entire Bible in one school year, and in doing so realize the overarching story that affects everyone. As part of this series, an accompanying double-disc album was produced, containing one song from each major section, entitled Music Inspired By The Story.

A brief look at the tracklisting could make some worried. After all, how can an album with Chris Tomlin, Jeremy Camp, Peter Furler, Michael Tait, and Mac Powell possibly not be disjointed and unorganized? It turns out, however, that Nichole Nordeman and Bernie Herms composed every song in this collection. Each song takes an individual section of Scripture, turns it into a first-person narrative, and applies the situations to the listener. For example, Brandon Heath's "Bend (JOSEPH)" recounts the trials of Joseph's life (the one who saved Egypt from famine) while bringing it home for the listener's own application, that of forgiving others' past faults, as Joseph did with his brothers ("But there's mercy in the soil, mercy in the sun/learning to forgive what cannot be undone/and what was meant to harm can't harm you in the end/stepped out on a limb I thought might break for love's sake/it can only bend").

While every song has the same style of lyrical approach, the individual artists who sing on each song also bring their own musical styles to give the album a diverse, but unified, front. Sure, the tracks with Natalie Grant ("Alive (MARY MAGDALENE)"), Casting Crowns' Mark Hall and Megan Garrett ("Who But You (ABRAHAM & SARAH)"), and MercyMe's Bard Millard ("It Must Be You (MOSES)") sound an awful lot like their own respective projects, but with all the lyrics written in the same style, it's only to each song's benefit regardless. Still, the best tracks on Music Inspired by The Story are the ones with the innovative musical backing. Peter Furler's take on Daniel boasts an energetic guitar-driven rocker ("No Compromise"), Jeremy Camp's country-tinged journey of Paul's testimony is only completed by the handclap beat ("Move In Me"), and Leigh Nash and Matthew West show up in an impressive duo observing creation as the first humans ("Good (ADAM & EVE)"). Even with all these musical styles' potential of unattractively clashing, every song is linked together "theatrically." Indeed, the album feels like one complete story, with each disc representing one Testament.

Some songs are better than others, but the two best come at the beginning of the New Testament disc. Francesca Battistelli's rendition of the Christmas story, "Be Born In Me (MARY)," is a stunning composition; her voice carries the heartbreak and acceptance of Mary's pregnancy effectively, and it's a wonderful Christmas song by itself. "When Love Sees You (JESUS)" is also a striking song from Mac Powell. He perfectly sums up the ministry of Jesus while singlehandedly records Jesus' message to all his children.

While definitely not a perfect project, Music Inspired By The Story is an extremely creative idea, and its final execution really works. Many will undoubtedly find themselves listening to their favorites by themselves without going through the entire album experience, but what Nordeman and Herms have created is truly remarkable. One of the better compilations of the year, The Story is well worth diving into.