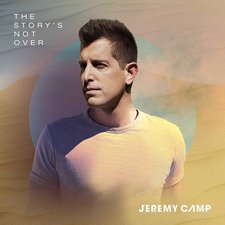 Jeremy Camp
The Story's Not Over


Not many artists can stay in the industry long enough to release ten studio albums over the span of their career, but, impressively, Jeremy Camp is here with his tenth record, The Storys Not Over. Not surprisingly, Camps sound has undergone adjustments with each release, to stay up to date with the current trends in the genre. This trend continues here, too, as the electronic elements take even more center stage than on The Answer. The end product is a cohesive pop album that showcases his powerful vocals, but unfortunately doesn't bring anything new to the table.

The opening tune, Only You Can, has Camp fully embracing the pop/dance direction he introduced in his last release, and it sets the overall tone for the record. Things peak with the previously released singles, Still Alive and Dead Man Walking. The latter is a declaration of the dramatic change God has made in his life, and ends up being a highlight: I was a dead man walking, until I was a man walking with You / I was a blind man falling, until I found the life youre calling me to. The touching Father slows things down, as he passionately sings, I was born to need You / To wipe the tears I cry / Yes, You made me a child / So You could be my Father. A standout towards the back end of the album is Indestructible Soul, which once again displays his impressive vocal range and capabilities.

Disappointingly, more than half of the record is relatively forgettable, due to the overuse of cookie cutter elements. Songs like Shouldve Been Me, Keep Me In The Moment, and the title track follow the same generic formula, and dont stand out at all. From a lyrical perspective, Camp fares a little better than most pop artists, but even then, nothing on this release quite measures up to some of his earlier work. Most of the tracks featured here sound like they have been heard before, both from a musical and lyrical standpoint. The lack of diversity hurts the overall value this record could have, and, unfortunately, the rare moments we see something different (like the hip-hop influenced You Dont, featuring Social Club Misfits) end up falling flat.

Despite these imperfections, fans of Camps music will find a lot to like about his newest endeavour. His message is consistent, and newer fans especially will enjoy the modern direction hes been taking musically. There are some decent cuts on this record, such as the aforementioned Dead Man Walking, and its likely that he will see great success with this project. That being said, it is disappointing to see an artist like Camp, who has a lot of potential, to consistently conform to the cliches of the genre, instead of creating something that could stand out (a task he could easily accomplish). Generally speaking, The Storys Not Over will satisfy current fans of his work, but sadly, it falls short of what it could have been.