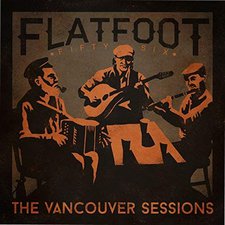 
As Christian rock's preeminent Celtic punk band, Flatfoot 56 have made their mark over the past decade with hard-driving, bagpipe-wielding fury. That being said, it's surprising that The Vancouver Sessions is mellow and folksy, as vocalist Tobin Bawinkel sheds his energetic punk sound for a bluesy growl.

The EP opens with "Cain," a drastic and creative reworking of the frantic hardcore of the original. Though both versions are good, this one gives the subject a vibe that's mournful rather than angry, as the accordion, resonator and percussion complement Bawinkel's craggy, world-weary performance. For the one new song, "How Long," Bawinkel expresses a psalm-like lament with the refrain, "How long / until the other side?" This simple, stripped-down structure gives the lyrics weight and room to breathe, so that the listener is free to ponder, now that he's not moshing. A good example of this is in "Penny," where the lyric, "No father can save metoo often I've crossed the line / already out of time" is given the space and emotion such a statement of hopelessness deserves. All of this, in turn, gives added depth to the song's turning point, "Come away my son / away my oneyour worth is so much more than others can see."

The two remaining songs, "I Believe It" and "Take Hold Again" carry on the EP's warm, intimate tone, with the latter's expressive mandolin part and vocal harmonies leaving listeners with a summery, camp fire feeling. Meanwhile, "I Believe It" firmly grounds Flatfoot in their Celtic roots with flute and bagpipes, ending with a Southern Baptist nod as they sing the chorus to "I'll Fly Away." This song's reinvention swaps the energetic joy of the original track with calm reassurance of God's promises.

In short, The Vancouver Sessions is a fun and successful experiment as Flatfoot 56 shows their versatility while emphasizing a vertical focus.