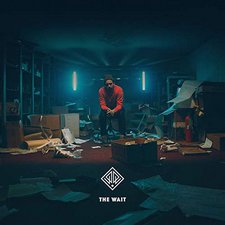 
David Leonard is no rookie musician, having spent time in the band Jackson Waters (2003-2009), as a touring keyboardist with Needtobreathe (2009-2010), and most recently as one-half of folk/acoustic duo All Sons & Daughters (2010-2018). Putting all that musical experience to work, he now strikes out on his own with his first solo album, The Wait.

Where his previous offerings from All Sons & Daughters chose the stripped back acoustic aesthetic, solo Leonard leans into the modern electronic pop palette. Likely an intentional move to step beyond paths already taken, this is not a bad thing, though it may come as a shock for fans of his former approach. Those quick to write off the new direction, however, would miss out on an artist with something to say to those struggling with anxiety, depression, and heartache. In his own words he describes the album thusly, "I don't know if this is a Sunday morning record...maybe it's more of a weekday record. But it is for worshippers. It's for anyone who's been in that desert place looking for signs of life."

Lead song "Wanderer" opens the album strong, building on a simple repeating keyboard part by adding drums until a full rock swell ends with him declaring that, although he is a wanderer, ultimately, "I am a child of God." Another highlight of the album is the vertically directed "Know Your Heart." It's pretty straightforwardly a pop song, but his cries of "I just want to know your heart" cut through the cynicism and clutter, to reveal a worshipper calling out in need of His Savior. From the first strains of the B3 organ, to the light percussive shuffle, "Come As You Are" stands out as one of the top three songs of the project without question. It simmers and sways, taking its time, as David shares an invitation straight from the heart of the Father with lyrics, "Come as you are/Come as you are to me/You're never too far."

"Share This Burden" is a cry out for true community begun with a chaotic piano mash, then carried along with heavy percussion, guitar flourishes, and a ghostly keyboard part. All told, this may be this reviewer's favorite upbeat moment of the record. "There's Nobody" utilizes auto-tune and electronic drums to effectively plead, "I wanna be more like you, Jesus." It's simplistic, though certainly earnest. The reminder in "Distant God" that He is anything but, is a needed one, and Leonard delivers lines like, "You are not a distant God/You are not who they say You are /That has never been Your heart/You are not hiding" come across as heartfelt and believable. "The Little That I Know" is a fantastic closer, and perhaps this reviewer's favorite overall track. The piano and string section complement his raspy vocal delivery, ending the track list on a high note.

Though not a perfect album, The Wait is definitely worthy of close examination and repeat listens. Don't let the glossy pop sheen of the songs fool you, this is an album of a man who has, and is, wrestling with what he knows to be true, versus what he has lived. He holds God's goodness and the troubles of life up to the light, and ultimately chooses to trust the heart of the Father, even in the waiting. It's raw, vulnerable, honest and authentic. It's the kind of worship music that the church needs, and a record this reviewer recommends you give a shot.

David Leonard's debut solo album keeps alive the spirit of All Sons & Daughters, with a sound that walks the line between indie pop sounds and radio-ready hits. Tracks like By My Side, Know Your Heart, and Come As You Are are moving anthems with a particular ability to capture the ears of a larger audience. The real standouts, in my humble opinion, are the quirky Signs of Life and the submissive Threads. While I have a few minor nitpicks, such as Leonards occasional giving in to worship leader tropes (like needlessly pronouncing certain words strangely), The Wait is ultimately a solid introduction to his solo career. I will certainly be happily following along and revisiting this album from time to time. - 3/14/19 Scott Fryberger