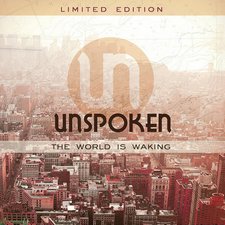 A year after releasing their debut EP Get to Me, and successful radio single "Who You Are," Unspoken returns with another batch of songs, though not the full-length album fans might have hoped for. The World is Waking is their newest five song EP, a chance to introduce new ears to their soulful, soft rock sound. Despite the album's short length, these songs pick up where the last five left off and nudge the band into more diverse musical territory.

Despite limited space, Unspoken still manages to pack a little bit more variety into the music this time around. While Get to Me settled safely into a radio-friendly CCM sound, The World is Waking does experiment ever so slightly with different textures. "Lift My Life Up" and "Everything" open the EP on familiar ground, playing closely to upbeat yet comfortable sounds and song structures in the vein of artists like Salvador and Newworldson. "Lift My Life Up" especially is an almost-anthem tailored for radio, co-written with genre heavyweight producer/songwriters Seth Mosley and Jason Ingram. It makes the oft-repeated declarations of many a CCM hit: "I lift my life, lift my heart up / All to you I surrender." A similar theme carries into "Everything," with similarly repetitious choruses and the proclaiming to surrender everything to God.

It's the latter half of the EP that starts to show some interesting growth for the quartet as they dabble in different musical styles and let lead singer Chad Mattson really show his vocal soul. "In Your Hands" is a ballad with a groove, a subtly R&B tinged sound that sways rather than stirs, while "Walking Away" uses a sprightly yet laid back summer pop vibe to celebrate leaving the old life of trouble and temptation behind. But perhaps the most surprising venture is "Bury the Workman," a raw, bluesy song with an evocative title. Recounting Biblical stories and rooted in an almost folksy adage -- "You can bury the workman, but the work will go on" -- this song carries a unique presence from the rest of the EP. The fact that it was recorded live with the full band and kept as boot-stomping raw as possible makes it even more of a standout moment.

As far as the music goes, Unspoken are certainly talented enough and the EP is well produced, uplifting, and often fun. The biggest thing keeping it from transcending middle-of-the-pack CCM releases, though, is the safeness that most of the songs play in, a sense that they would fit well on the radio, maybe make some nice background driving music. Despite this, it's encouraging to see hints of growth since their first EP. The World is Waking is tight and catchy, and every song shows enough hints of diversity to keep the record from becoming stale. In that sense, it's a step in the right direction.