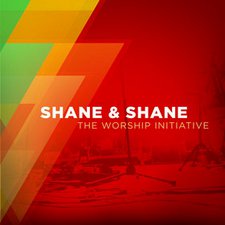 
On February 26, 2014, Shane & Shane launched a Kickstarter for their Worship Initiative project, an online resource where worship leaders and musicians can receive both musical training and spiritual teaching (if you haven't checked out their Kickstarter video head over to YouTube for a good laugh). After a successful $154,191 campaign, the duo independently released ten full Worship Initiative volumes and a Christmas album. Partnering with Fair Trade Services, Shane & Shane is now poised to release their twelfth album for the project, simply named The Worship Initiative. Backed with the perfectly blended vocals of Barnard and Everett, this project effectively serves as a snapshot of popular moments from the past two years in modern worship.

The Worship Initiative is largely a covers album with songs from Hillsong, All Sons & Daughters, Bethel Music, Kari Jobe, Chris Tomlin, and Leeland all being represented. Many of these original songs foster honest and inviting settings to praise Jesus, and although the Shanes' interpretations are sonically different, they retain a similar sacredness and beauty. Shane & Shane also include two decent originals here, "God Of Ages Past" and "So I Can Love." Eleven of the twelve tracks are brand new recordings, with "So I Can Love" being previously released on Volume 3; however an alternate version of "All the Poor and Powerless" was also featured on Volume 1.

Over half of the album assumes a straightforward modern worship vibe complete with airy electric guitars, anthemic drums, and plenty of emotional builds. Shane & Shane own this style on "Scandal of Grace" and "All the Poor and Powerless," providing dynamic soundscapes and heartfelt vocal performances, but this big production is less memorable on "Forever" and "Man of Sorrows"--though they are still respectable tunes. As with much of Shane & Shane's earlier material, the two musicians sound best with a stripped down acoustic style. Such is the case for the album highlights "Great Are You Lord" and "Seas of Crimson."

Collections like these beg the question, 'why,' but close examination of the track list and some context will help ease the mind of the skeptics (myself included). If the intention of The Worship Initiative was to simplify these songs to make them easier for a worship team to reproduce, then the duo accomplished this without sacrificing too much creativity. Fans of Shane & Shane and anyone who loves modern worship can't go wrong picking up this album.