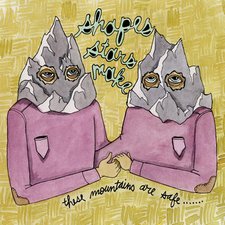 Over the years, I have developed a philosophy on what makes any musical project an album. The first requirement I have for any album, which I will admit is more psychological than rational, is that the release must contain at least nine tracks. However I have to give Shapes Stars Make a pass on that since their eight-track long debut album, These Mountains Are Safe, clocks in at a satisfying forty six minutes. The second requirement is that an album must have lyrics to over half their songs. Now this too is also not without some exception since we have seen an artist like Andy Hunter produce quite an impressive album with many instrumental or near instrumental tracks. However, the moody indie rock sound of Shapes Stars Make is a far cry from Hunter's fun, upbeat techno-dance music.

The lack of lyrics on The Mountains Are Safe are particularly damaging because the three tracks which feature words are, by and large, the most memorable on the project. The indie fueled music sounds very passive and oftentimes takes too long to engage the listener. For example, the first, and one of the more enjoyable songs on the release, "Giant Bird" is repetitive over the course of six and half minutes and is slow to develop its instrumental tune. After the second track concludes uneventfully, the album's highlight, "(We Are) The Hurting" begins. But, lead-singer Michael Gooden's similarly laid-back vocals fail to engage the listener effectively. Even the intense guitar-driven stanza, which seems to be building to an unforgettable climactic ending, is disappointing because of its abrupt and empty finish. Some fierce electric guitars will spark some interest on "Fireflies and Lights," but the rest of the album is thoroughly uneventful, bordering on monotonous. One bright side is that the songs do encourage star gazing along with awareness for the lonely and hurting.

Much of These Mountains Are Safe is melodic indie rock, but throughout the lengthy songs, the music starts to blend leaving one to only wonder what a few more days in the studio might have produced. Casting album criteria aside, we are left with a dry, relatively unappealing album which lacks diversity and lyrics. Those who want some good instrumental background music sound should skip Shapes Stars Make's debut and spin their favorite film soundtrack instead.

Shapes Stars Make is a fresh face to the scene, bringing post-rock goodness to the masses. Pulling references from bands like Explosions in the Sky, This Will Destroy You, and The Sailor Sequence, SSM's beauty lies within guitar hooks and massively reverberated melodies instead of choruses and bridges. Their full length debut, These Mountains Are Safe-- produced by Explosions in the Sky engineer John Congleton-- is eight tracks of pure atmosphere. Mostly instrumental, the album is forceful, but quiet; technical, but always bordering on chaos. Ironically, the only low points in These Mountains Are Safe seem to be in the group's few vocals, which are quite haunting but neither catchy nor convincing. Overlooking this fact, however, is not difficult in the least considering the rest of the album's unique nature. While Shapes Stars Make may not yet encompass the reputation and audacity of their aforementioned counterparts, they are certainly on the right track... and you will certainly hear of them again soon. - Garrett DeRossett of Jesusfreakhideout.com