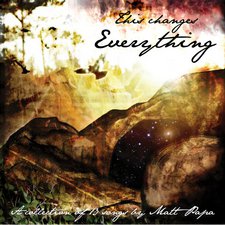 Matt Papa
This Changes Everything

North Carolina-based Matt Papa is a worship leader at his home church. It is fitting, then, that his music has a very strong worship element. While the musical styles are varied on his latest full-length offering, This Changes Everything, a worship theme is central to each and every song.

The first song on the album, "Our Sovereign God," sounds a bit like an 80's anthem song, and seems a bit out of place on the album, although it sets an energetic tone that is mostly maintained throughout. The second song, "One Thing," is about sacrificing for Jesus, with lyrics such as "only one thing is worth everything - Jesus Christ, magnified." And so it goes throughout the album - themes about Christ's life-changing love, becoming a child in Christ again, and so on. The title track, "This Changes Everything," sounds like it could have been included on a Matthew West album. The radio-friendly "What are We Waiting For" also sounds similar to other artists currently garnering radio airplay, although Papa's style is clearly his own. "Stay Away from Jesus" addresses complacency, with lyrics such as "indifference is the road that leads to Hell." That's a pretty clear message from an artist that is straightforward in his style and delivery. "The Lord is a Warrior" includes a rap element that features Christian artist Shai Linne. Were it not for Shai's inclusion, this song could easily be mistaken for a 1980's Petra song. There are moments on the album where the listener may feel as if Matt is crossing from one musical decade to another because the songs don't always follow a common musical style. This does not help the overall flow of the album, but does offer variety of sound.

Even with the energy Matt displays on most of the songs, there are quieter moments, such as the mostly acoustic final song, "Amen," which reminds us that while we won't always understand God's plan, we can place our trust in the Lord.

There are too many good songs on this album to mention here, and the overall effort is so strong that any weaknesses are overshadowed. Matt Papa's This Changes Everything is definitely worth a listen if you like worship music with a touch of rock. It's hard to imagine anything other than a very bright future for this talented musician.