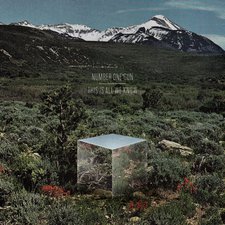 Number One Gun
This Is All We Know

Although To The Secrets and Knowledge was a more experimental project for Number One Gun, This Is All We Know is a decidedly emo flavored pop rock effort. With the frontman duties, Schneeweis delivers a strong performance on nearly every track and, as a result, the album has a lot of energy. The first song, "Get A Little Weird," offers a satisfying and catchy chorus that remains one of the best on the album. However, only a handful of songs after the opener distinguish themselves. Only "Disappear" and "For You" stand out as pop rock highlights, and it's mostly because of the guest vocals (From Anberlin's Stephan Christian and Sarah Ann, respectively). "Dark" is distinctive because the same guitar work is repeated for three minutes straight to a detrimental effect. The finale, "I'm On Fire," steals some of the experimental energy from To The Secrets And Knowledge, but it feels out of place here. Another problem comes in the form of rocky transitions between the verses and the refrains. Lyrically, the album is more accessible than previous Number One Gun efforts and the result yields obvious positivity. "Make This Last Forever" and "It" rely on pronouns making it difficult to tell if there is anything inherently spiritual about them.

I was split on To The Secrets And Knowledge. On one hand, I enjoyed the seasoned indie feel early on in the album, but I disliked the way the project faded into obscurity with its later tracks. There's no doubt This Is All We Know is a far more accessible album than its predecessor, but it still retains enough of its indie rock flair to steer clear of radio clichés. However, the album fails to distinguish itself, as too many tracks sound like the one before it. Although It's good to hear Number One Gun again, it's unlikely this album will have staying power throughout the year ahead.

Longtime Number One Gun fans may be extremely disappointed with This Is All We Know. But it's not because the album is bad; it's because it's actually really good, and it's probably the last release from the band ever. Four years have passed since the last Number One Gun album, and almost ten since they released an album as a full band. Even though its arrival is somewhat bittersweet, This Is All We Know is exactly what fans have been waiting for. The album starts off with a bang with the aggressive "Get A Little Weird" and it doesn't stop from there. Unlike most albums, there aren't any filler songs here that don't belong. Each song stands out for different reasons, whether it's the quiet self-reflection of "I'm On Fire," or the pulsating rhythm of "Make This Last Forever." This Is All We Know is the ultimate greatest hits album because not only is it a collection of brand new songs, but it takes the best qualities from all of the band's previous releases and brings them into one. It's hard, but not too hard. It's fun, but not lacking in lyrical meaning. It's diverse, but not disjointed. It's approachable and easy to listen to. It seems like the band knew that this one counted--not that their other albums didn't, they have one of the most complete and enjoyable catalogs in the genre, but this is their lasting impression. It's their legacy. And it's easy to see the lyrical and musical maturity they've developed over the last decade. This Is All We Know is the perfect conclusion to an outstanding career of one of the most influential Christian bands of the 2000's. While this is the final chapter in the story that is Number One Gun, it will be exciting to see what new possibilities await the members in the future. - Review date: 1/13/14, John "Flip" Choquette