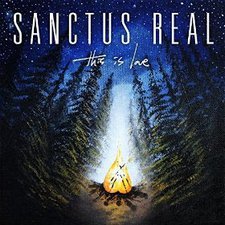 Sanctus Real
This Is Love - EP


Lead singer changes are a tricky beast. It can draw in new fans, alienate old ones and it can sometimes risk looking like a marketing ploy. With Matt Hammitt having been the voice of Sanctus Real for 19 years, fans were swirling with curiosity and maybe even some doubts when the band announced they'd be continuing on without him. The question had to be asked: how can anyone fill the shoes of Matt Hammitt?

The new lead singer, Dustin Lolli, has a significantly deeper voice than Hammitt, but the transition is not as dramatic as initial listens suggests--they are both honest in their songwriting and earnest in their vocal delivery. A little background on Lolli, he was previously the vocalist for Cannons, a pop/rock band who drew its influences from Sidewalk Prophets and Tenth Avenue North. More recently, Dustin and his wife Sarah performed as the singer/songwriter duo James and June. His experience as a singer is obvious, and it was both wise and respectable of Sanctus Real to bring on a lesser-known talent for this next chapter in their collective career.

To accompany Lolli's husky vocals, the band has taken a decidedly more "epic" approach to their brand of radio-friendly pop/rock. "This Is Love" perfectly illustrates this new direction. The song opens with Dustin's pensive vocals and a light electric guitar, gradually layering in piano, drums, acoustic guitar and strings. It builds in intensity until the 2:43 mark, sits in 7 seconds of quiet tension, and erupts with a blazing guitar riff, rousing drums, and powerful singing/shouting from Lolli. The songwriting is just as evocative as Lolli calls out Christians who hide in fear or don't practice what they preach, challenging them to fulfill their responsibility to act in love.

Though it also takes a while to get going, "Find Me" is an upbeat tune pulled off with skill and confidence. It's the most radio-ready of the three new tunes, but it is more dynamic than the average CCM pop song. The piano ballad "My Desire" concludes the 12 minute EP as a heartfelt prayer to be more like Jesus. "Find Me" and "My Desire" are both solid cuts, but neither of them grabs your attention as much as "This Is Love," particularly in lyrical poignancy.

While it seems too soon to tell if we will ever get another album as high in quality as found in the early years of Sanctus Real, these three songs present a more ambitious side to Sanctus Real, something we started to see again on The Dream. While there may not be anything groundbreaking on this EP, it is far less cookie-cutter than Run and more durable than The Dream. If This Is Love is any indication of the future for Sanctus Real, it looks promising.