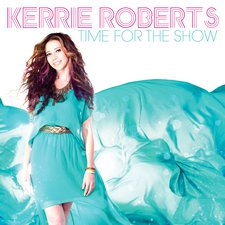 Kerrie Roberts
Time For The Show

It feels like forever ago since Kerrie Roberts released the lead single from her sophomore album, Time For The Show, "Finally Home," to the radio. Indeed, Roberts' follow-up to her solid-but-ballad-heavy (and, frankly, kind of depressing) self-titled debut has been a long time coming (Having been bumped from its July 10, 2012 release date to April 2nd of the following year!). But the good news is that Time For The Show, at worst, is definitely equal to her debut, and at best, superior to it in every way.

The one thing that stands out the most on this record is Robert's strong and unwavering vocals. Her confidence in her own abilities sounds like it has increased immensely and she is not afraid to belt out notes that she never even attempted on her debut. The music itself is very poppy and electronic, not unlike mainstream radio pop, but I feel that her music, usually, has a lot more substance than her mainstream counterparts. In fact (and I almost hesitate to use the comparison since she admittedly has a ways to go before she reaches the brilliance of these artists), I must admit that I was mentally comparing her music, favorably, to Plumb and Charmaine at times (particularly album highlight "Not Real Yet," which could fit seamlessly on a Plumb album). Her message, however, remains unchanged, and that is simply that we need God and we can't do anything without him. Her songwriting is solid, honest, inspiring, and completely Christ-focused, but she does tend to use clichés at times (most notably "Sing" and "Masterpiece," and a little bit on the title-track and "Finally Home"), and one song, "Wake Up," is just too corny. But these instances are easily counteracted by highlight tracks such as "Not Real Yet," the ballad "In Your Sight," "Finally Home," and the quietly epic closer "Like Jesus Loves."

I didn't quite know what to expect after Robert's debut, but I can confidently say that Time For The Show met, or exceeded, my expectations in almost every way. This woman has some serious potential, and I have a feeling that she is only starting to discover it. I'm looking forward to her future releases, and I will not be surprised if one of these days, she actually is mentioned unhesitantly, in the same breath as Plumb or Charmaine.